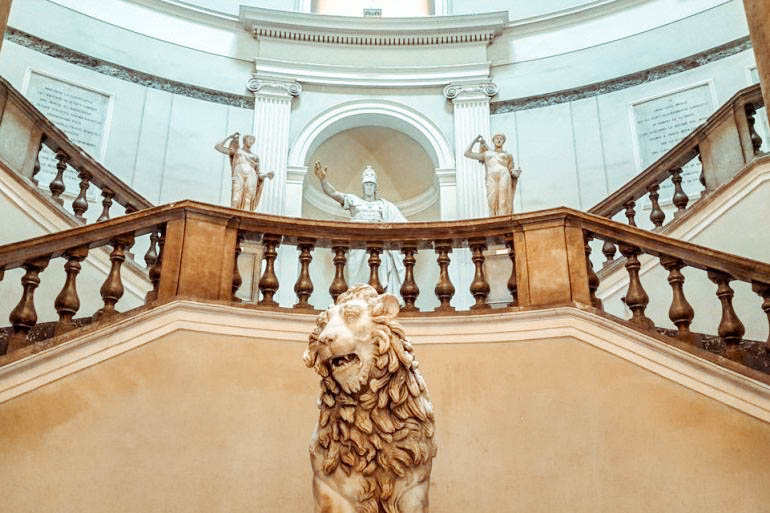 The National Archaeological Museum of Naples is among the most important museums in the world for classical archeology. For its history, even before the extraordinary richness of its collections, it represents a fundamental moment in the formation of classical culture in Europe.
The Museum has its roots in that cultural event that in the eighteenth century led to the first formation of modern archeology: an event in which Naples found itself playing a leading role, far above the same position that the Kingdom of which it was the capital occupied between European states.

In 1777 King Ferdinand IV decided to allocate the seventeenth-century Palazzo degli Studi to the Bourbon Museum and the Royal Library. Thus, the Bourbons’ plan to create a grandiose institute for the arts was being created in Naples, capital of the Kingdom, bringing together the book collection, the very rich collection of antiquities, belonging to Elisabetta Farnese, mother of Charles III, in a single complex between Rome and Capodimonte, and the archaeological collections formed during excavations undertaken in the Vesuvian towns since 1738 and previously exhibited in the Herculaneum Museum of Portici.
Enriched with other important collections, such as the Borgia and part of the same personal collection formed in Naples by Carolina Murat, the Museum was inaugurated in 1816 with the name of the Royal Bourbon Museum.

During the Nineteenth Century many new entries were made to both private collections and materials from excavations carried out in Campania and southern Italy and especially in the Pompeian and Vesuvian countryside: between 1830 and 1840, among prestigious monuments , the mosaic of Alexander and the other mosaics of the House of the Faun of Pompeii, the “Blue glass”, the “Vase of Darius” arrived at the Museum.
In 1860, with the unification of Italy, the Bourbon Royal Museum became state property, taking on the new name of “National Museum”.
On the ground floor, the Farnese, recently rearranged and reopened to the public, is a collection of antiquities formed in the 16th century. for donations, acquisitions and excavations, such as those of the Baths of Caracalla, promoted by the Farnese family in Rome; in the basements, there are the Epigraphic and Egyptian collections, second in importance only to the Egyptian Museum of Turin; in the mezzanine, the Medagliere, the section of the Mosaics detached at the time of the Bourbon excavations in the houses of the Vesuvian cities and the Secret Cabinet where erotic material collected from the eighteenth century and exposed for a long time to the public are exposed.

On the first floor are the Salone della Meridiana, one of the most important and largest classrooms in Europe; the section of the frescoes, detached between the mid-eighteenth and early twentieth centuries. from houses and buildings of Pompeii and Herculaneum; the rooms of the Villa dei Papiri in Herculaneum, with the sculptures that decorated one of the most luxurious villas ever found in the Roman world, famous for its library of papyrus with Greek and Latin texts; Ancient Naples, with a selection of finds from Greek and Roman Naples; the rooms of the Temple of Isis in Pompeii.