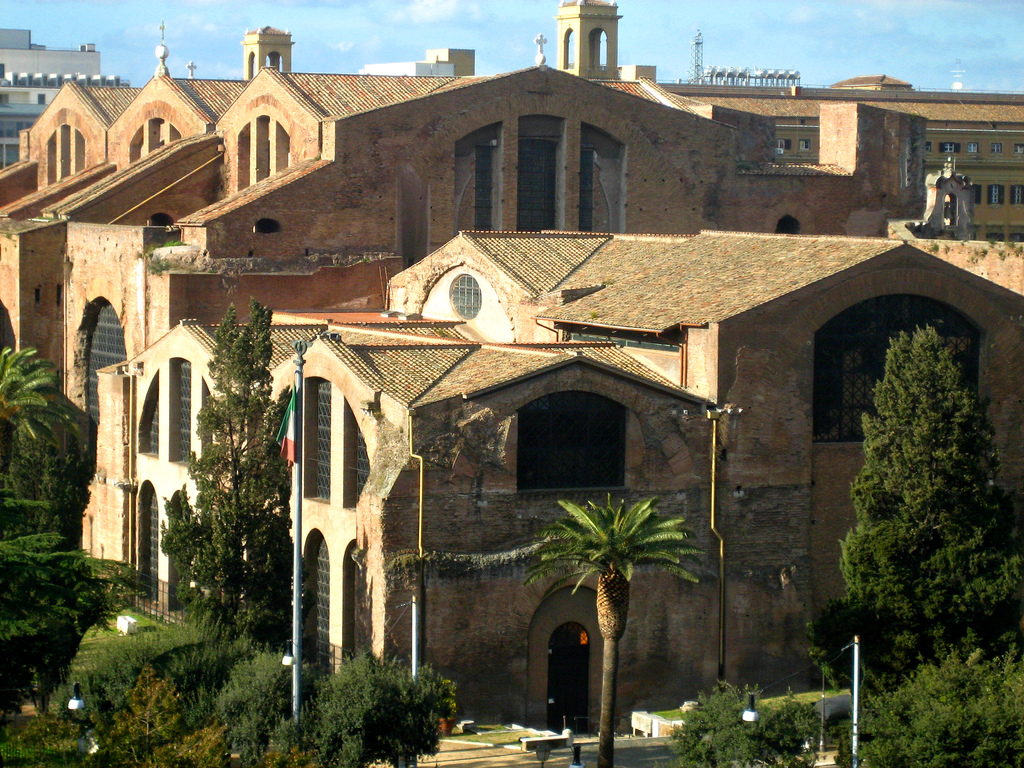 The Baths of Diocletian (Terme di Diocleziano) are the most imposing thermal complex ever built in Rome. Erected between 298 and 306 CE, they spanned more than 13 hectares and could accommodate up to 3000 people at the same time, within a structure consisting of a series of environments such as gymnasia, libraries, a swimming pool of more than 3500 square meters and those rooms that were the heart of every thermal complex: the frigidarium (cold bath), the tepidarium (lukewarm bath) and thecalidarium (hot bath). It was precisely these latter spacious rooms the ones converted by Michelangelo into the Basilica of Saint Mary of the Angels and the Christian Martyrs: in the other environments arose the Carthusian Monastery, conceived by the artist himself.

Original seat of the Museo Nazionale Romano (National Roman Museum) since its institution in 1889, the Baths and the Charterhouse are currently undergoing a restoration process that has thus far permitted the reopening of a part of the monumental complex and of the two sections of such a composite museum, the Section of Proto-history of the Latin Peoples and the Epigraphic Section, this one pertaining to Written Communication in the Roman World.

Besides the exhibition, visitors can enjoy, therefore, the sumptuous and imposing Aula Decima, wherein are exhibited the big tomb of the Platorini and two chamber tombs, decorated with frescoes and stuccoes, originally from the Necropolis of the Via Portuensis.

It is then possible to have a stroll in the large Michelangelo’s Cloister of the Charterhouse, which today is an unexpected haven of peace and silence despite being only a few steps from the bustling Termini Train Station; in it are on display more than 400 artworks such as statues, reliefs, altars, sarcophagi, all coming from the Roman environs.