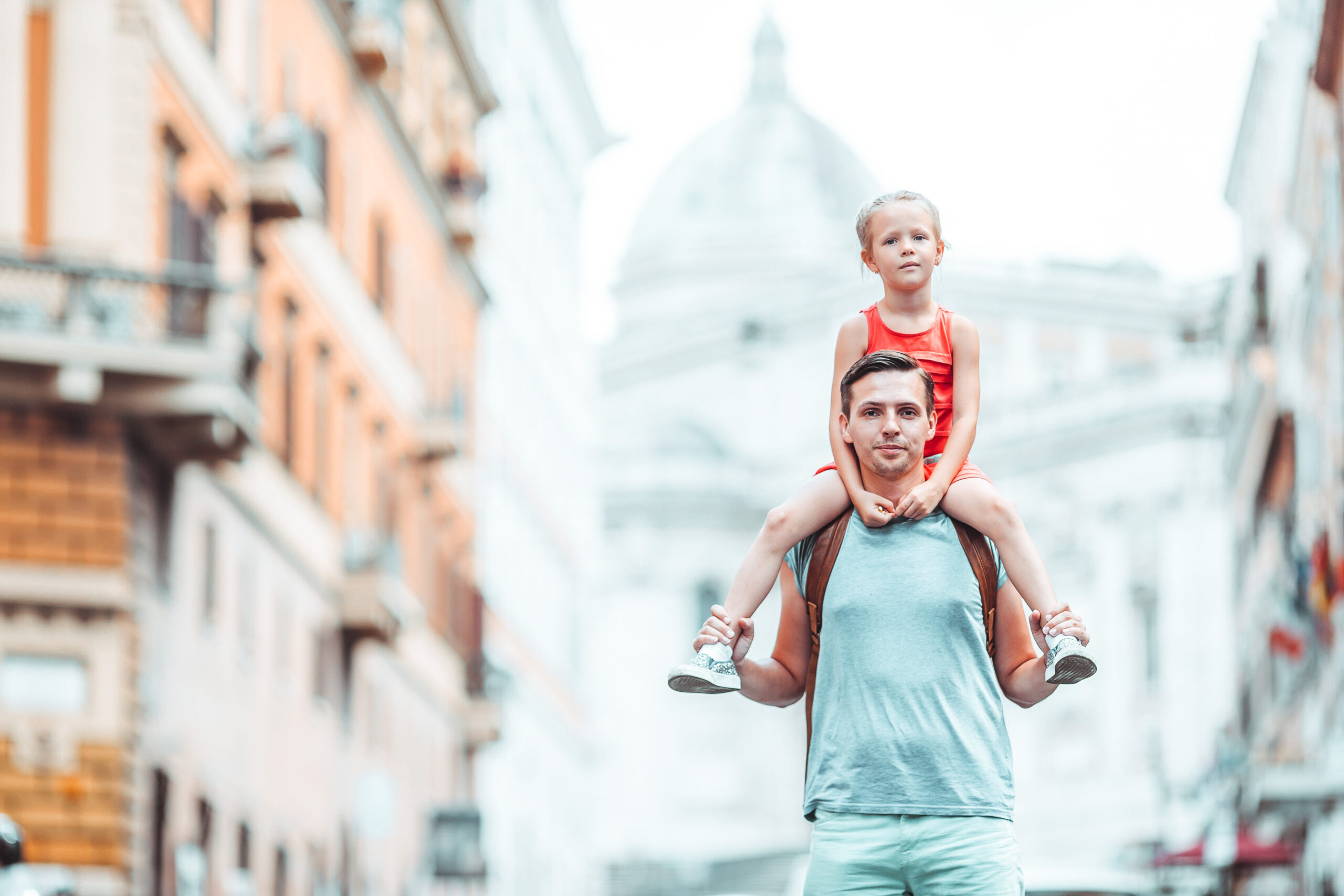 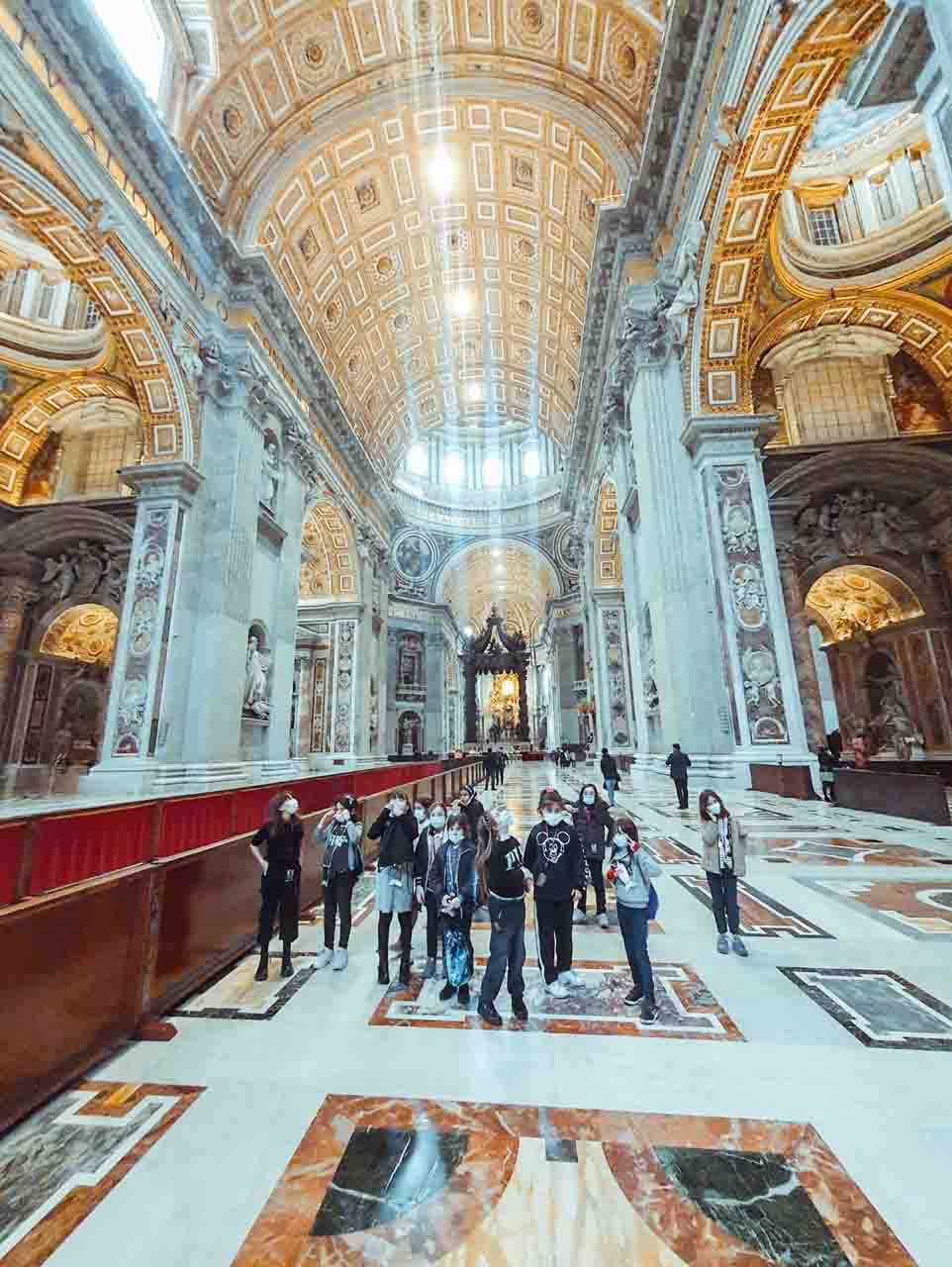 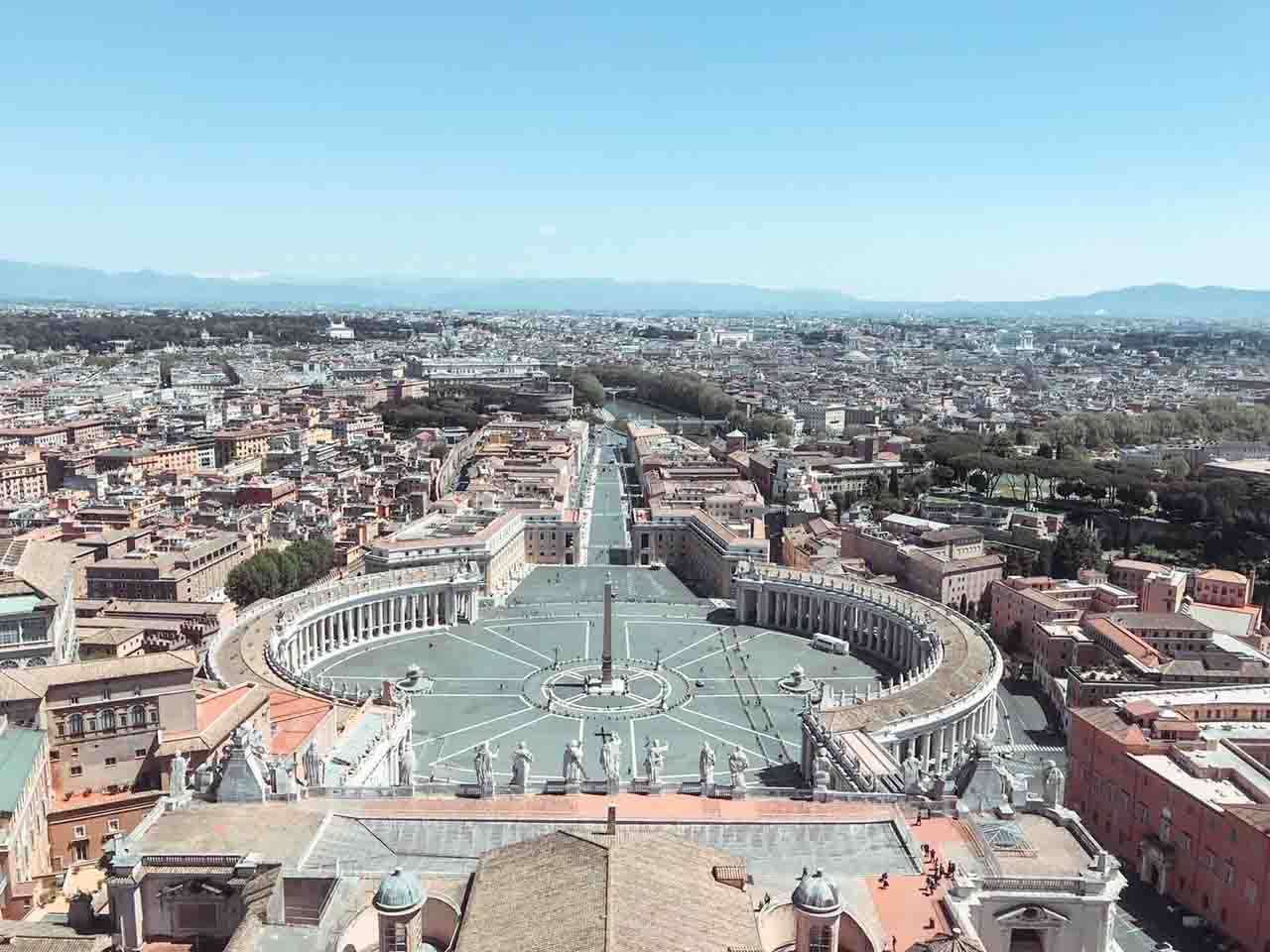 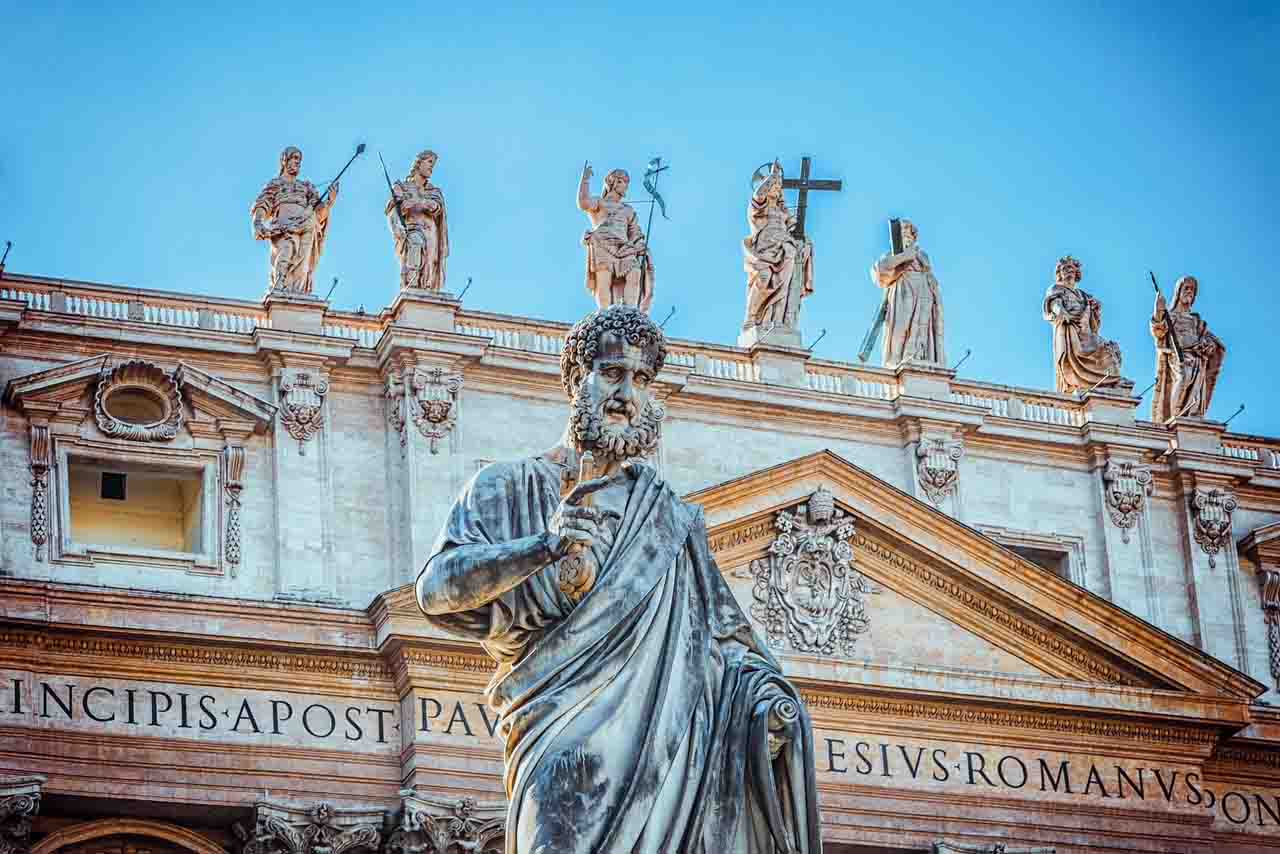 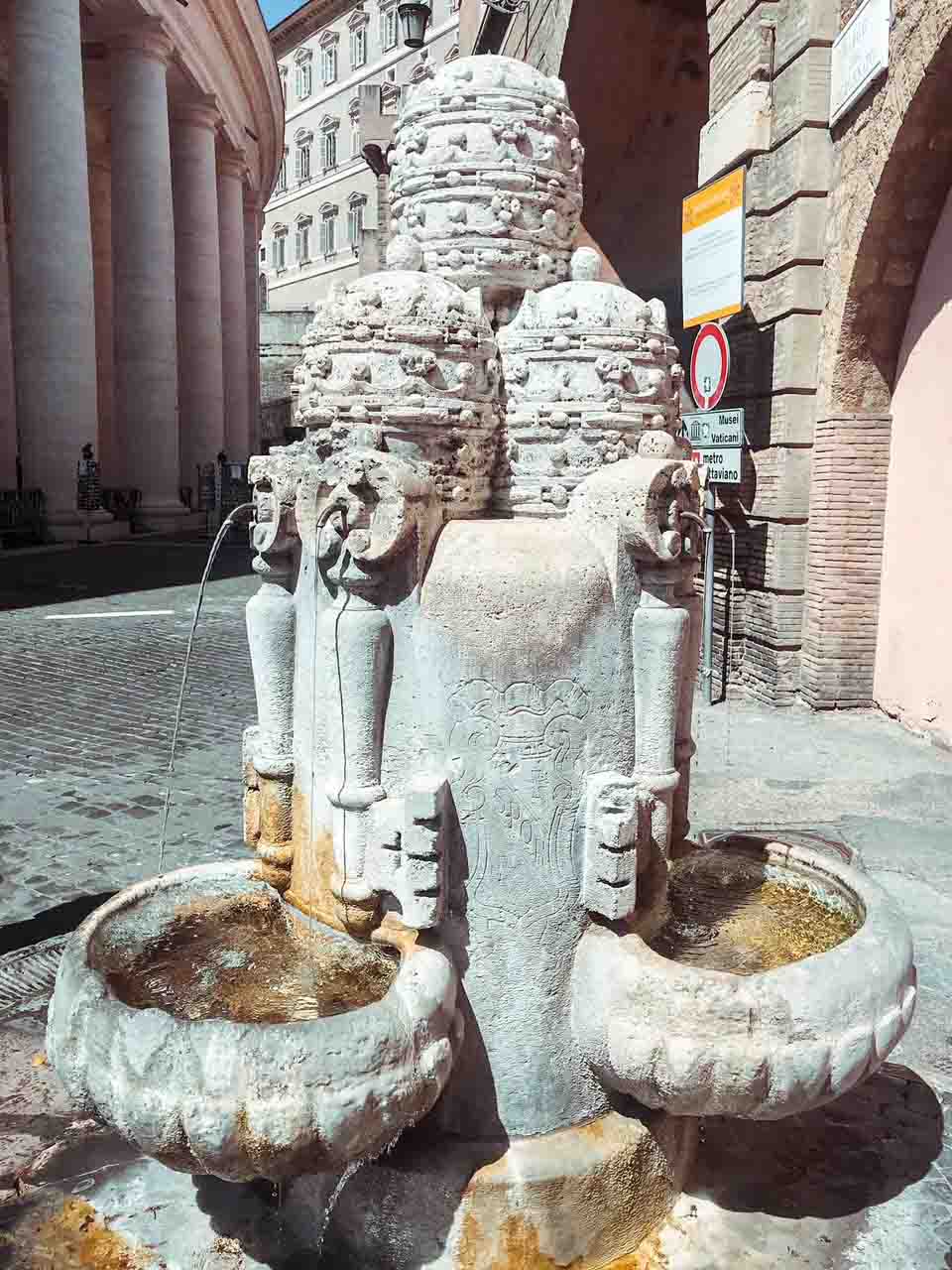 Water, sky, earth … the main elements will guide us in our search, through the Rione Borgo, among fountains, alleys and ancient walls, until we reach the roof of Rome … St Peter’s Dome!

We will visit St Peter’s Basilica, one of the largest buildings in the world: 218 metres long and 132.30 metres high up to the dome, the total area is about 23,000 square metres and can hold 60,000 worshippers. It took more than a century to build (1506-1626), and the greatest architects of the time worked on it, including Bramante, Michelangelo, Raphael and Bernini. It was built to replace the ancient Constantinian basilica (4th century), which stood on the burial site of St. Peter. The rich interior is divided into three naves, decorated with dozens of statues and ten thousand square metres of mosaics, mainly dating back to the 17th and 18th centuries.

The chapels contain outstanding works such as the Pietà by Michelangelo, funerary monuments by Bernini, Canova and Pollaiolo, and the Tabernacle of the Blessed Sacrament by the Baroque genius. In the centre, under the dome, stands Bernini’s Baldacchino, right opposite the dazzling reliquary of the Saint’s Chair.

The exterior is scenographically defined by the square and the colonnade, a synthesis of Michelangelo and Bernini’s projects. The façade is dominated by the monumental dome, composed of two overlapping domes based on the model of Florence Cathedral.

Are you ready, little explorers?

What will this fascinating route hide?

And now, after passing quizzes, rebuses and riddles, get ready to look for the hidden keys, who knows where the various clues will take you!!!