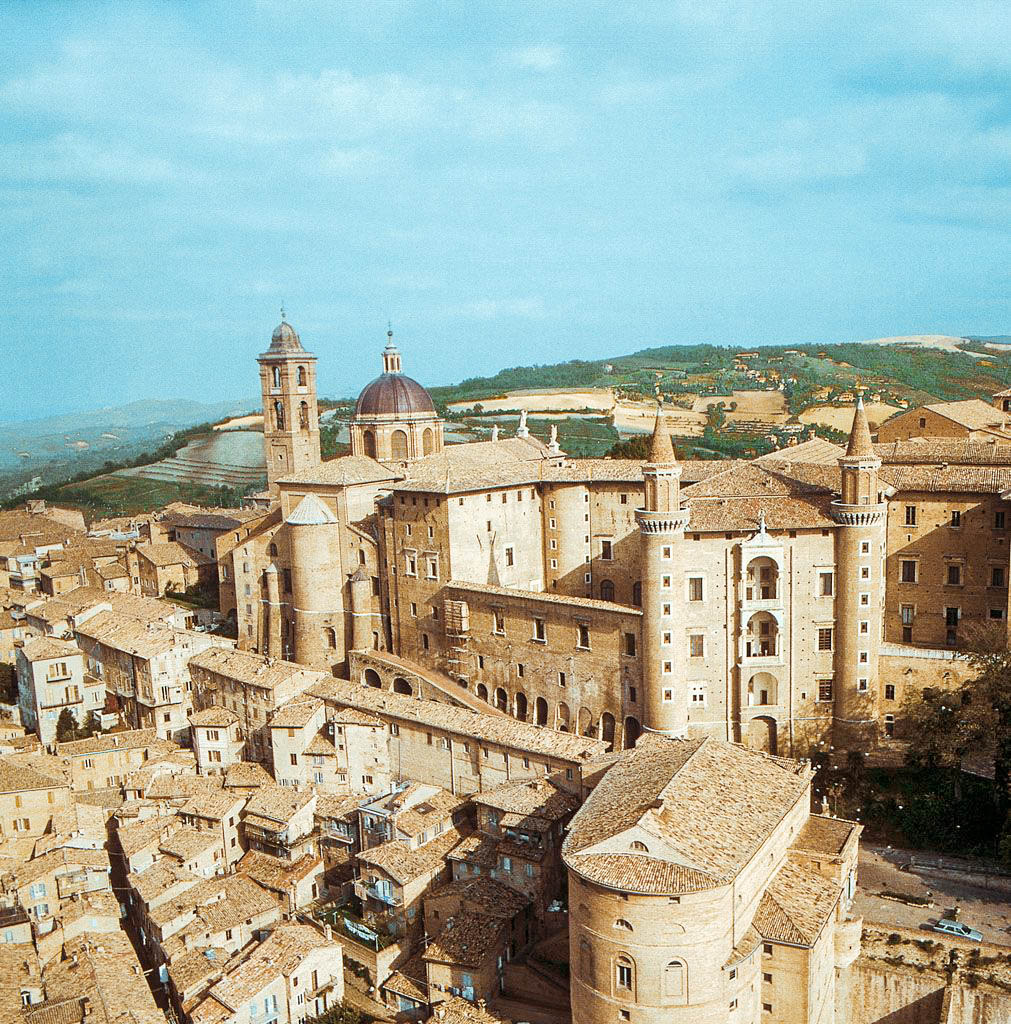 Urbino, walking tour of the historic center and visit of the wonderful Palazzo Ducale

Immersed in the soft hills of the Marche rises Urbino, a city of immense historical and artistic wealth. In Urbino it is easy to get lost with the nose up while walking in its historic center. Surrounded by a long brick wall and adorned with sandstone buildings, Urbino from a simple village became the “cradle of the Renaissance” and, even today, walking through its historic center you can breathe the fifteenth-century air.
At the National Gallery of the Marche, in the Ducal Palace of Urbino, a symbolic painting of Italian art is preserved: it is the “Ideal City” attributed according to the critics to Piero della Francesca, Leon Battista Alberti, Luciano Laurana, Francesco di Giorgio Martini and other artists. Admiring this painting, which like the Mona Lisa is in everyone’s collective imagination, is the best way to understand what Urbino represented for Italian and world art. In its perspective rigor it embodies the dream of Federico da Montefeltro, shared by the artists who surrounded him, to build the ideal city of the Renaissance. Wandering through the alleys, palaces and squares, one realizes that the Duke has not gone so far from the target. The historic center of Urbino, in fact, is protected as a World Heritage Site by UNESCO. In a few hundred square meters there is a heritage that has marked the art and architecture of Europe for many decades.
Defining the Palazzo Ducale as just a “palace” is reductive: it is a small fortified city built by Federico da Montefeltro and built starting from 1444. Cultured and refined, Federico wanted the Ducal Palace of Urbino to outperform all the other princely residences of Italy. It was not just a way of celebrating one’s power: he wanted to transform Urbino into the “ideal city” of which the Palace was to be the highest expression.

In addition, he loved artists and wanted a place to host them and make them work. The construction involved several architects for more than 30 years. Interventions by Maso di Bartolomeo (Palazzetto della Jole, Melaranci apartment and part of the courtyard), Luciano Laurana (arcaded courtyard, the Grand Staircase, the Library, the Sala degli Angeli, the Sala delle Adienze, the Soprallogge , the sacred area with the study) and Francesco di Giorgio Martini who completed the pending work. The two most beautiful testimonies of this thirty-year work are the “Facade of the torricini”, perhaps the most photographed point of Urbino and “Lo studiolo” rightly defined as a “treasure chest of beauty, refinement, perspective …”. Today the Palazzo Ducale houses the National Gallery of the Marche with works by Raphael, Titian and Piero della Francesca.
Both Bramante and Raffaello took their first steps right here in Urbino. Raphael in particular was trained in his father’s workshop and began with works commissioned by him from the nearby towns of the duchy.
Raffaello Sanzio, was born in Urbino on April 6, 1483, the only son of Giovanni Santi, painter of good fame and of Battista’s Magic by Nicola Ciarla. Little Raphael spent his childhood between the colors and brushes of his father’s workshop and the Montefeltro court, where the greatest artists of the time passed. In the rooms of the Doge’s Palace he could admire the works of illustrious painters and to meet the many characters who frequented the ducal city in an era of absolute splendor, intellectual and artistic vivacity.
The Divine Painter never forgot his land, so much so that he always continued to sign Raphael Urbinas (Raffaello da Urbino).