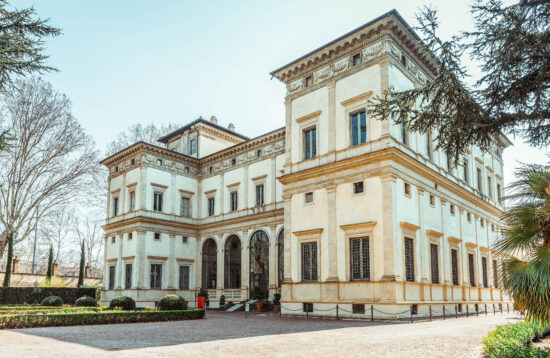 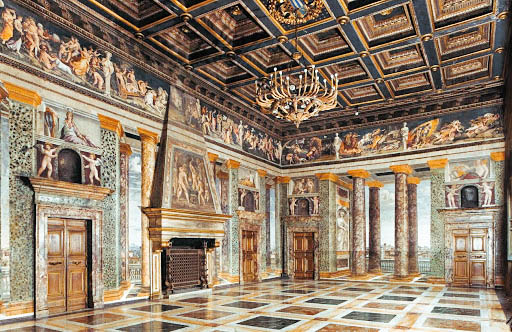 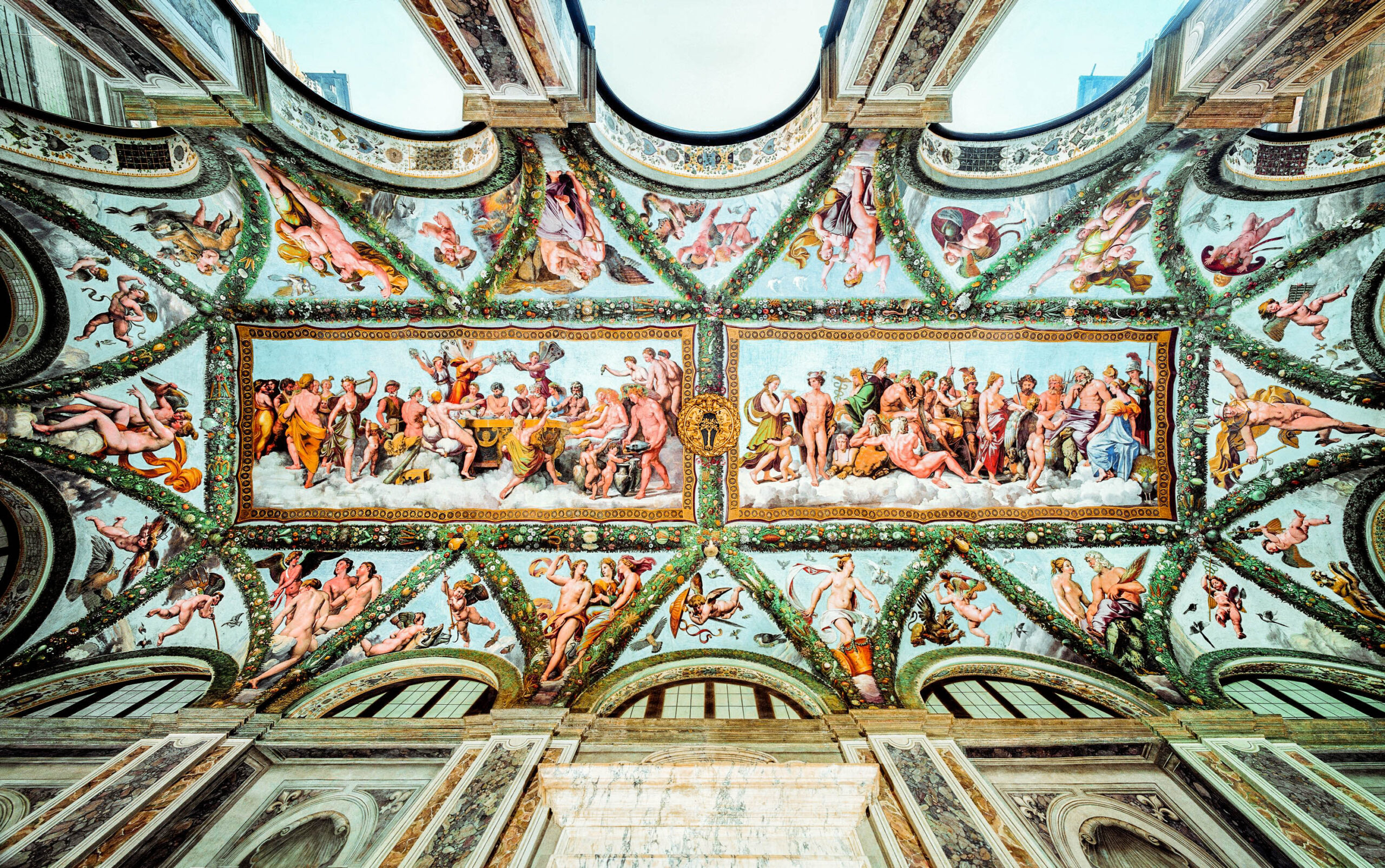 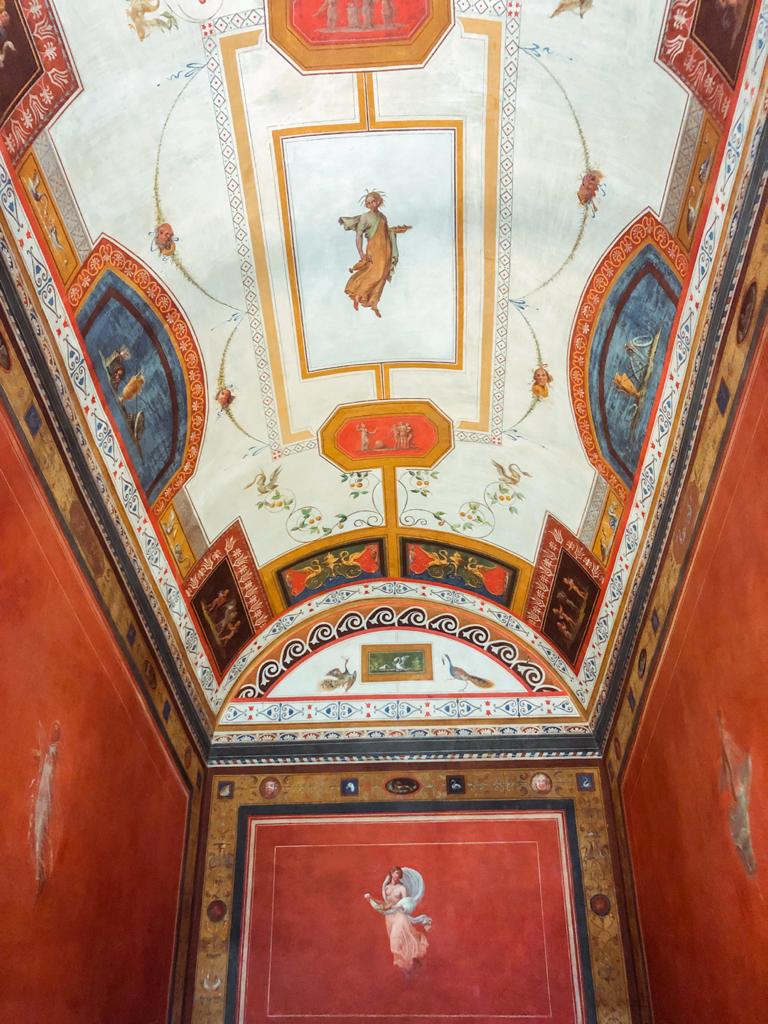 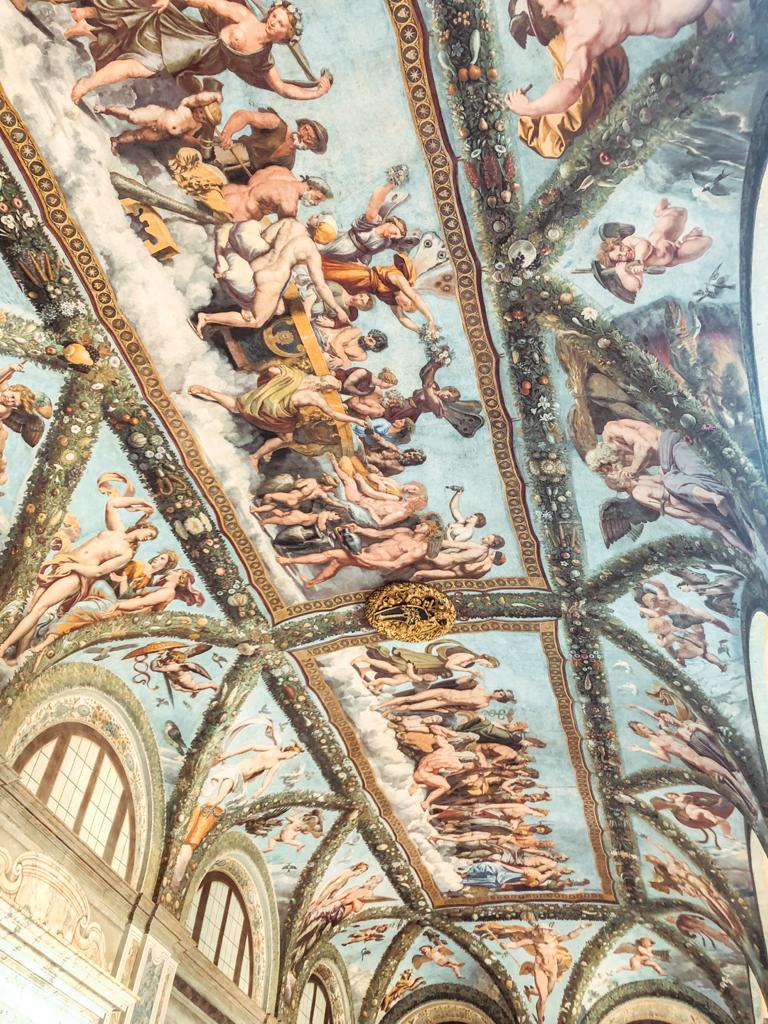 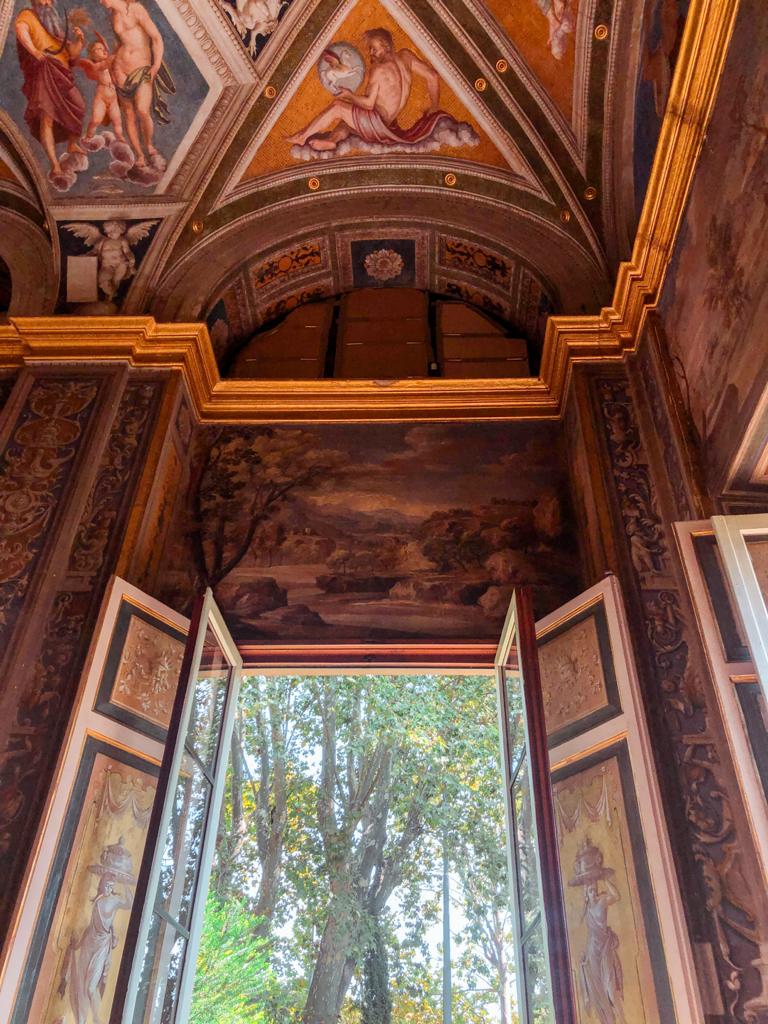 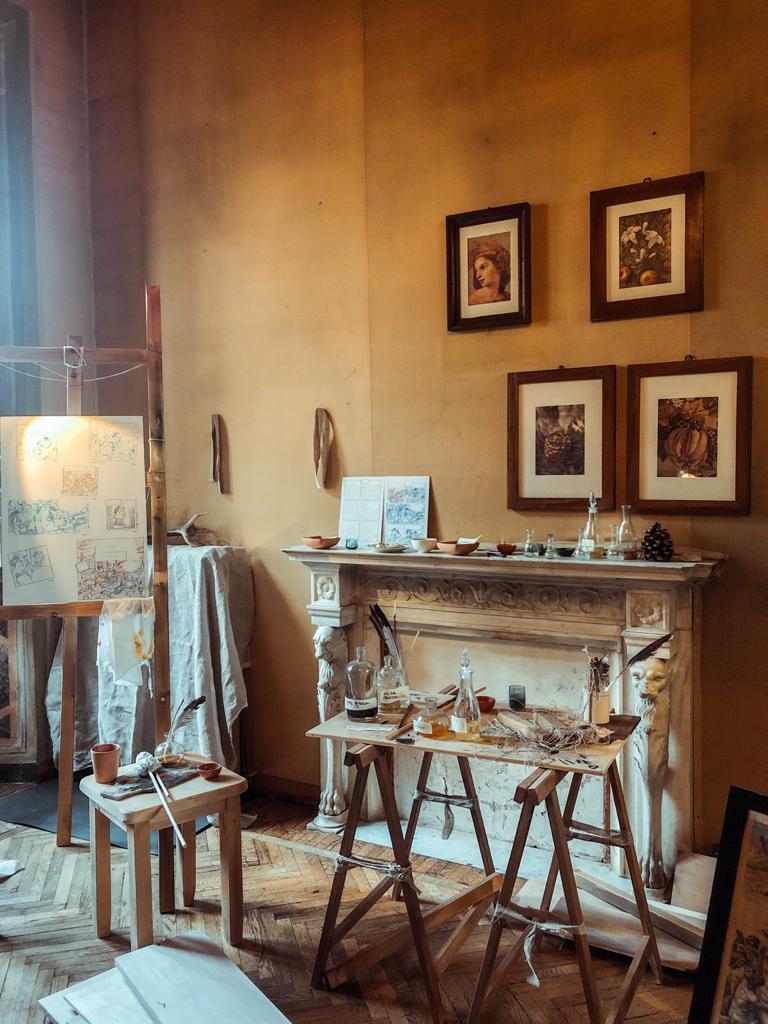 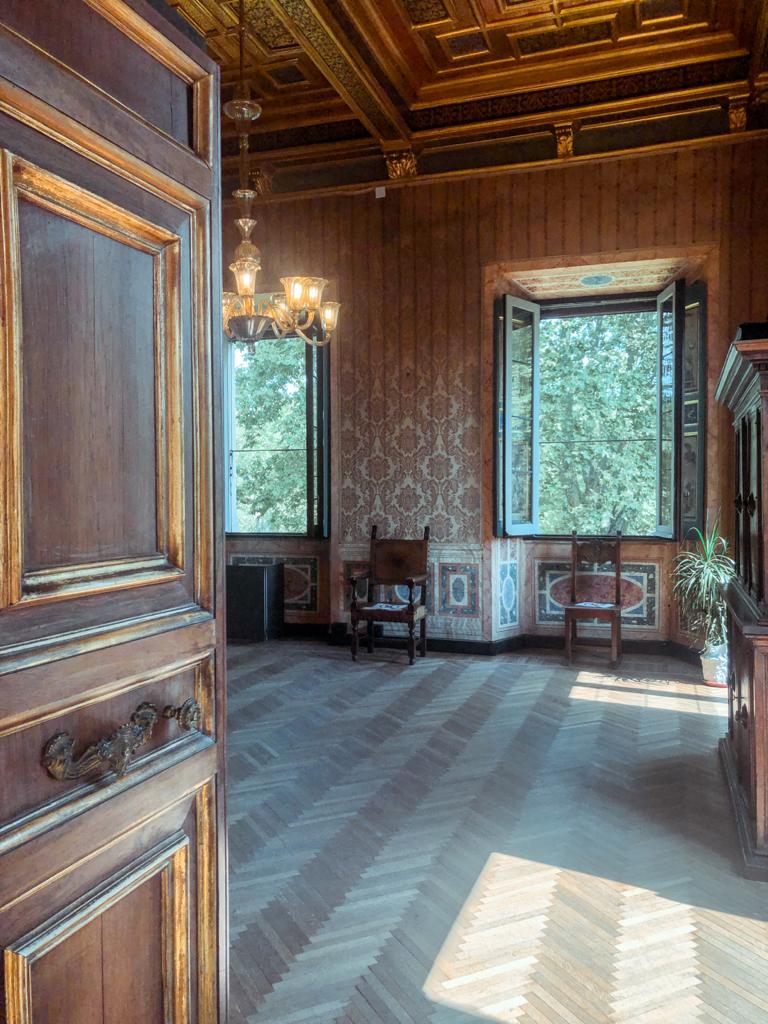 The Villa Farnesina is situated on Via della Lungara, opposite the Corsini Palace. The Sienese banker, Agostino Chigi, named “Magnificent” by his contemporaries, acquired the villa, which had been completed in 1509 by Baldassarre Peruzzi, a Sienese architect of great renown. The villa, a wonderful example of Renaissance art, was decorated by such famous painters as Raffaello, Sebastiano del Piombo, Giovanni Antonio Bazzi (called Sodoma), Giulio Romano and Peruzzi himself, and it was furnished with such magnificence that it aroused general admiration. In the rooms of the Villa high prelates, noblemen, poets, men of letters and artists used to meet; comedies were performed there and sumptuous banquets were held. The most famous of these were the banquet of 30 April 1518 and the one in honour of St. Augustine’s day in 1519. The first banquet, with a magnificent decor of tapestries and carpets was laid out in the stables, which at that time were placed near the Tiber and were later demolished when a high Tiber wall was built. The second banquet, on the occasion of the wedding of Agostino and Francesca Ordeasca, which was blessed by Pope Leo X, was held in a setting of pomp and splendour, in the great hall of the villa, and in the presence of the Pope himself, twelve Cardinals and many guests.

After Agostino Chigi’s death, the villa was bought by Cardinal Alessandro Farnese (from whom the Villa takes its name). It passed to the Bourbon family in 1714; and finally a long lease of the villa at ground rent was given to the Spanish Ambassador Bermudez de Castro, Duke of Ripetta, who later redeemed it. The Italian State bought the Villa from the Duke’s heirs and in 1928 it was destined to become the home of the Reale Accademia d’Italia. After the suppression of the Accademia d’Italia in 1944, the villa became the property of the Lincei Academy, which, by law, had succeeded the suppressed Academy.

The Farnesina is set in the midst of a beautiful garden of bergamot trees, cedars of Lebanon, cypresses, laurel bushes and evergreens. On the ground floor of the Villa an entrance hall leads to the Loggia of Psyche, (recently restored) painted in fresco (after designs mainly attributed to Raffaello) by the Master himself and by his pupils Giulio Romano, Francesco Penni, Raffaellino del Colle and Giovanni da Udine.

On the left of the Loggia of Psyche is the Room of the Frieze, round which is a fresco of mythological scenes painted by Baldassarre Peruzzi. The labours of Hercules, the myth of Orpheus, Mercury with the heifers of Apollo, and the Rape of Europa are particularly remarkable for their wealth of detail.

On the right is the Hall of Galathea, which contains Raffaello’s famous fresco representing the triumph of the nymph Galathea, on a shell pulled by dolphins. All around there are delicate and idealized landscapes painted by Gaspare Dughet.

A light and elegant staircase leads from the entrance hall to the first floor and into the wonderful Salone delle Prospettive designed by Peruzzi. Here the walls seem to open on to shining landscapes, framed by columns, and an amazing sense of reality is achieved.

From the windows on the first floor there is a beautiful view of the gardens. A pleasant stroll under the laurel bower leads to a marble plaque which bears the inscription:

[Trad.: Whoever enters here: what seems horrid to you is pleasant to me. If you like it, stay, if it bores you, go away; both are equally pleasing to me. ]