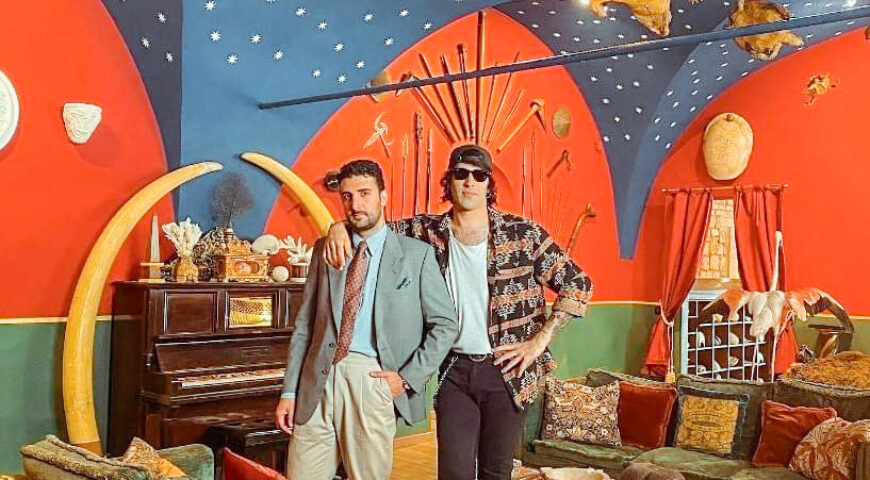 One more miracle in Rome

One more miracle in Rome

A short time ago in the most picturesque and touristic area of Rome, Trastevere, a new spot appeared on the cultural map of the Italian capital. It is the Diorama Gallery, opened by two friends, Giano Del Bufalo and Niccolò Maria Mottinelli, both with extensive experience in the field of collecting and researching extraordinary objects, now available to the public.

Even before entering the main gallery space, guests are immediately surrounded by a series of mirabilia. “These walking sticks actually keep many secrets,” – Giano tells us as soon as we walk through the gallery. “They are called ‘animated sticks’. This one, for example, is a poor painter’s walking stick: here is the palette of colors, unscrewing it the brushes come out with the ampoule to dilute the colors. This other one looks like an umbrella, instead, if you press the button, it shoots.”

In the main hall, the gaze disperses from the wonders on display: at the entrance, guests are greeted by a flamingo with outstretched wings, a stuffed crocodile hanging under the ceiling painted like a starry sky with a clear reference to Piermatteo d’Amelia’s Sistine Chapel and Giotto’s Cappella degli Scrovegni.

The cupboards display war clubs, stuffed animals and an Egyptian sarcophagus of a jackal, considered a sacred animal. One wall is decorated with numerous ivory miniatures, which were once used as photographs in aristocratic homes.

Portraits are one of Niccolò’s passions. “This portrait is signed by David’s favorite student, who finished his master’s paintings, now on display at the Musée du Louvre,” – the collector says.

On another wall are plaster casts, one of which was part of the decoration of a building in San Francisco that probably collapsed during the terrible 1906 earthquake.

Both founders are very fond of music: one of the main works in the collection is a self-playing piano from the beginning of the 20th century by the English company John Broadwood & Sons, manufacturer of the instruments of the English royal house. In the future, as soon as the mechanism is repaired, the Gallery plans to invite musicians and organize evenings.

The creation of Diorama was preceded by the personal projects of the two founders: Mirabilia Art Gallery, near the Circus Maximus, created by Giano Del Bufalo and the Maison Musée Dorée, in the Rione Monti, by Niccolò Maria Mottinelli.

Mirabilia Art Gallery, inaugurated in 2016, immediately became a place of great interest for the Roman and international public. Numerous exhibitions and events have been hosted in this space. In creating the gallery, Giano was inspired by the Wunderkammer, literally “Chambers of Wonders, in which, from the 16th century to the 18th century, collectors used to store collections of extraordinary and exotic objects, the so-called “Mirabilia,” from all over the world.

With his Maison Musée Dorée, Niccolò was inspired by the house-museums of 19th-century European collectors. After buying the former studio of a craftsman in 2013, he created a unique space where cultural life was always in full swing: exhibitions, concerts, conferences. Later, he also opened a library there, consisting of more than 2000 books on classical archaeology and art history from his private collection.

The birth of the “Diorama Gallery

The pandemic brought significant changes to the realization of both projects. Giano tells: “Closing Mirabilia I felt so much the need to have a place of belonging, fundamental for this passion of mine and not to keep the works only for me but to make them available to the public. So, talking with Niccoló, who was in the same situation as me, we thought of creating Diorama”.

This is how the idea of the Diorama Gallery was born, a new space to show the best pieces of the young collectors’ collections, so that these “Mirabilia” would be available to the residents and visitors of the city.

This website uses cookies to improve your experience while you navigate through the website. Out of these, the cookies that are categorized as necessary are stored on your browser as they are essential for the working of basic functionalities of the website. We also use third-party cookies that help us analyze and understand how you use this website. These cookies will be stored in your browser only with your consent. You also have the option to opt-out of these cookies. But opting out of some of these cookies may affect your browsing experience.
Necessary Always Enabled

Any cookies that may not be particularly necessary for the website to function and is used specifically to collect user personal data via analytics, ads, other embedded contents are termed as non-necessary cookies. It is mandatory to procure user consent prior to running these cookies on your website.