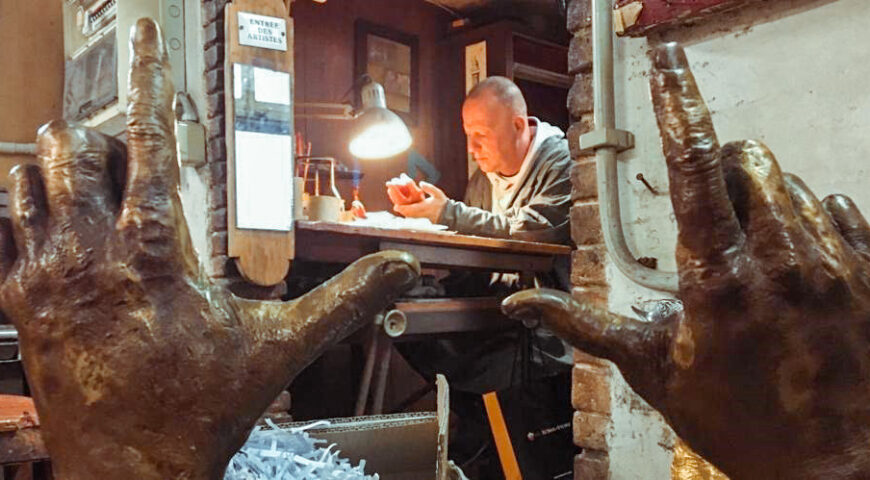 To get to Dante Mortet’s historic workshop you have to cross Palazzo Pascucci, better known to the Romans as Palazzo della Scimmia, and you cannot help feeling that you are immersed in another era, a feeling that becomes even more vivid and intense inside the workshop where you are immediately struck by the shapes and the smell of wax.

Dante, intent on his work, comes towards me wearing his work apron and well, what can I say, I already know that there will be a lot to learn and above all to pass on.

Dante tells me that his family has been in this workshop for about 80 years and in Italy for 150 years, calling his family ‘masters of the precariat’. They moved to Italy in the mid-19th century from France, when there was a strong migration of craftsmen to Tuscany. The Mortet workshop was set up in Florence by Aurelio Mortet and, with varying fortunes, went on with his sons, some of whom were trained in wood carving while Armando and Dante were trained in the art of chiselling. At the end of the nineteenth century, the Mortet workshop in Florence won a competition and moved to Rome, because with the establishment of the new Ministries on the occasion of the Unification of Italy, they were commissioned to embellish and create decorative objects for the Ministry of the Treasury.

During these years the workshop gained strength but with the crisis of 1929 it had to be reduced until it closed down completely. The family continued to work at home and after the war reopened in what would become the workshop of today. Aurelio and Virgilio founded today’s Mortet workshop and ran it until the 1970s/80s, when the current generation took over, consisting of Dante and his brother Andrea, who carried on the family tradition, but always with their father, master Aurelio, who, at over 85 years of age, continues to oversee all the work.

Among the most important works of the Mortet family, Dante immediately mentions the Sword of Victory made by his grandfather Dante for King Victor Emanuel II when the Vittoriano was inaugurated, where it is still kept today. He also tells me about the work he has done over the last 150 years for various pontiffs, including the pen with which John XXIII signed the 1963 Encyclical and the ring for Pope Paul VI and then other works for John Paul II for whom Dante, with great devotion and feeling, created a bas-relief portrait in gold. The Vatican has always been present among the works of the Mortet workshop, which also specialises in sacred art, an art applied to the liturgy that requires a great knowledge of the various symbols, a difficult art but, as Dante points out, an art of tradition especially in Rome.

One of the flagships of the Mortet workshop are the fountains that were created with Dante senior in the 1920s with the creation of the Turtle Fountain, chosen and in great demand because of the magic of the square, the beauty of the fountain seen from all sides, its history and its size. Later, there was a very important episode on the occasion of the wedding of Tyrone Power and Linda Christian for whom Bulgari produced as a wedding gift a bracelet with small gold fountains that were made by the Mortet workshop.

From this moment on, the workshop began to produce silver and bronze fountains of various sizes for important shops such as Petochi in Piazza di Spagna, Vestroni at the Pantheon and for famous clients such as Giulio Andreotti or the King of Spain for whom the Fontana della Barcaccia was made or for Busch’s wife for whom, unable to visit Piazza Navona for security reasons, the three Bernini fountains were made in Piazza Navona and positioned as the centrepiece of a table at an institutional dinner. 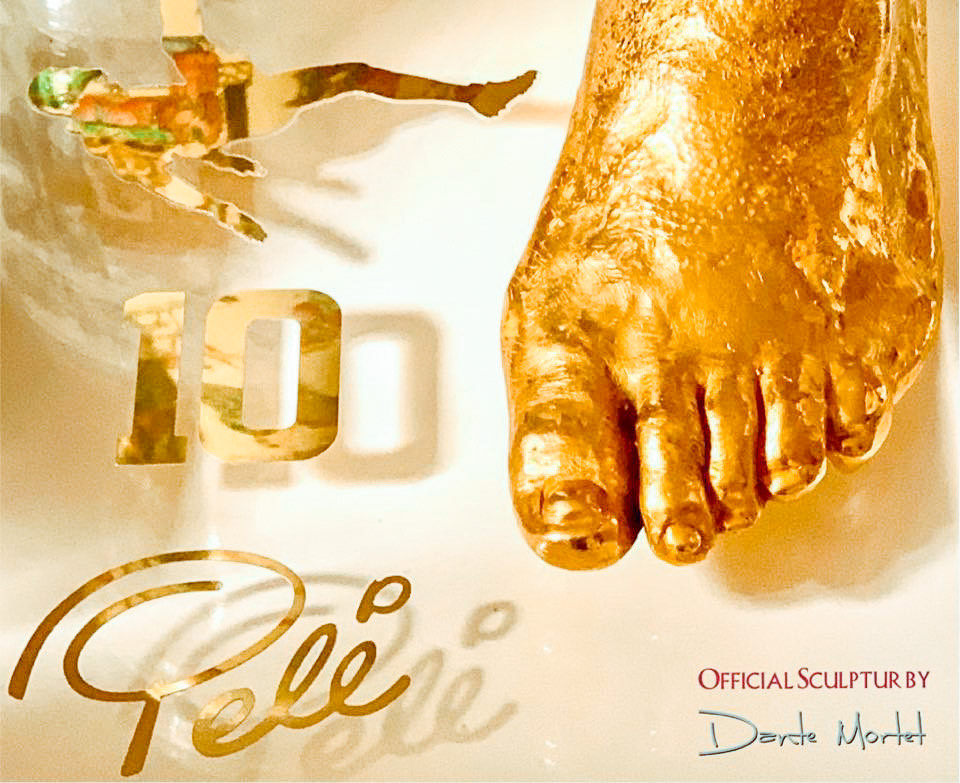 The Mortet workshop works and continues to work with footballers, making reproductions of cups and other items for them. For Dante, the footballer is a modern gladiator, the Colosseum and the gladiators revisited in a modern key, like the stadium and the footballers, and it was from this concept that the idea of the foot sculpture was born. Among those created to date we can mention Pelé’s foot which, placed on a pedestal, conveys precisely the image of a gladiator who has achieved his fortune through his foot: the instrument of the foot is, in fact, the fortune of footballers and their family, so the bronze sculpture will remain forever within the family as a memory and identity of the same.

Dante does not define himself as an artist, that is not what he is aiming for, his goal, specifying and acknowledging that he has very simple origins, is to make objects that can create emotions, if art is an emotion, Dante underlines, then I am an artist. 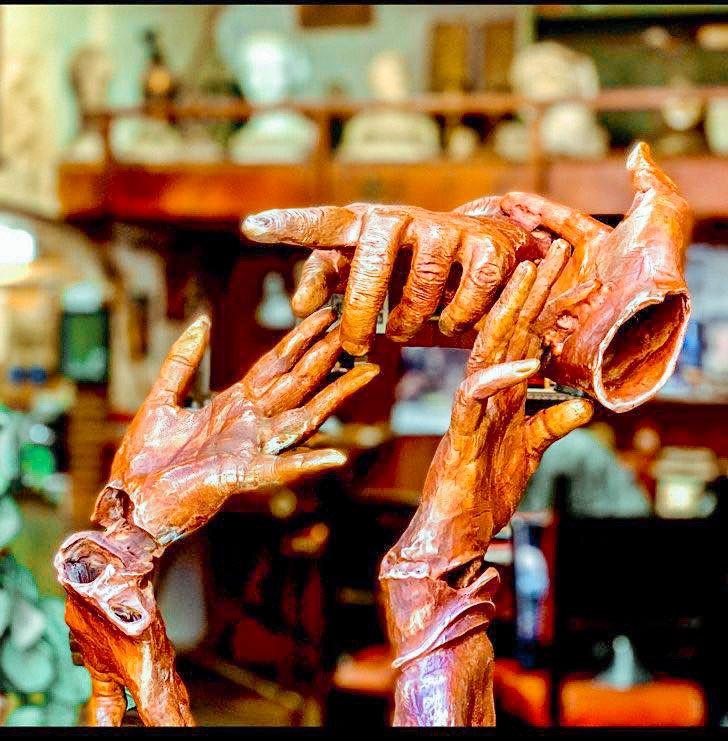 From this concept comes the idea of the artisan hand that puts, or rather wants to put, manual skill back at the centre of the production process, the hand is the Italian way of life, it is us, Made in Italy is born from that humble instrument that is the hand, which learns everything that is in the heart and mind and transforms it through real hard work and builds emotions, it is therefore the ultimate goal of these three elements, eyes, mind and heart that combine with each other.

The craftsman with his own hand transforms the material and makes it a dream for others, with the ancient technique therefore the craftsman makes the object and returns to the client his thought, his dream trying to interpret it and make it an emotion.

The first hand Dante made was his father’s hand, the hand that passed on the craft to him, that allowed him to live in the beauty of the world of craftsmanship and that took him around the world. In fact Dante tells me that his father had already made his own hand as a model for the hands of the sculpture of St Paul of the Cross.

Dante defines the craftsman’s hand as a timeless project during which he will make the hands of the famous people he meets over the years: among the most famous to date are those of Ennio Morricone, of whom he speaks with great affection and admiration, Robert de Niro, whom he met in his New York flat and whose extreme simplicity he remembers, Quentin Tarantino for whom he made the first hand sculpture for the set of the film The Hateful Eight, and many others. 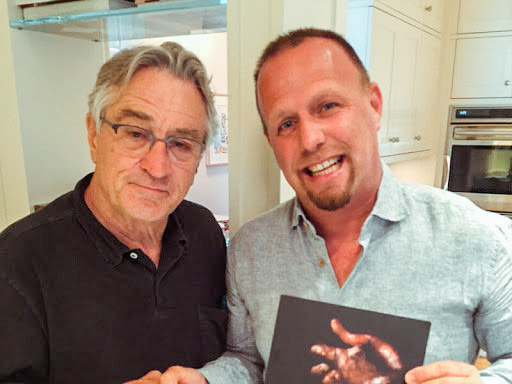 Dante tells me with great satisfaction about the sculpture he made for the city of Latina representing the ‘abused’ hands of the non-EU labourers working in the Agro Pontino. Here, the hand has the function of redeeming the story of these workers whose dignity is besmirched, humiliated and unpaid. With this sculpture, in his own small way Dante managed to get this message shared with the authorities, the European Community, the Municipality of Latina and the various local associations. The importance of the monument is that it bears witness to and tells their story every day.

The one in Brooklyn will be a large hand of about 3 meters entitled We come from there that from Manhattan will indicate Italy and will be the symbol of the hands of Italian immigrants in America who, with their work and passion, have redeemed their identity in a very generous land and will also serve to ensure that we never forget where we come from.

On the other hand, under the Lanterna in Genoa, where they are building the Museum of Migration, a hand will be placed representing the last hand that Italians looked at before leaving and it will point to the Americas.

The hands of Latina, Genoa and New York will be a symbol that will allow us to talk about migration, to make comparisons and to reflect on the theme that the hands of Latina do not have that background, that ancient knowledge and craftsmanship that Italian hands have, which are not better, but in the past they had more opportunities because those hands knew how to build a future.

So Dante emphasises the concept of restarting from manual skill in a contemporary key and putting it back at the centre of the Italian production process because the hand creates a concrete, sustainable economy that is known and recognised all over the world.