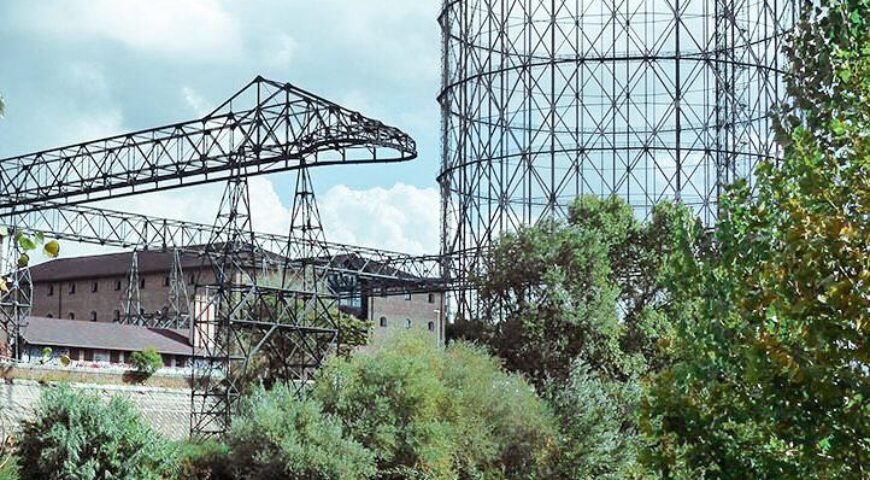 On 24 September 1863, Pope Pius IX inaugurated the Ponte di Ferro (Iron Bridge), south of Porta Portese and the port of Ripa Grande: a railway bridge over the Tiber, with a movable central span, which would have allowed the extension of the Civitavecchia-Rome line, started four years earlier, to Rome‘s new central station at Termini, active since February 1863.

Significantly, the new infrastructure was called the ‘Bridge of Industry‘.

Seven years later Rome was conquered by the Piedmont and annexed to the Kingdom of Italy to become its capital.

The papal city was relatively small (its population was just over 200,000) and sleepy, and it was in need of profound transformation. An attempt was made to start a process of modernization to adapt Rome to its new role and bring it closer to the other European capitals, characterized by a much more advanced level of industrialization.

The Testaccio area and the area immediately to the south between the Aurelian walls, the Tiber and Via Ostiense were chosen for the development of productive activities. The presence of the river, the port, the railway and the new bridge were decisive factors in the choice, an infrastructural ensemble that would also facilitate the supply of raw materials and goods.

The 1883 Master Plan accepted and consolidated these indications. The construction of the new Slaughterhouse (1888-1891) right at the foot of Testaccio hill favored the birth of new manufacturing activities, which subsequently expanded towards the Ostiense, close to or just outside the walls. Even today, the name of streets such as Via delle Conce and Via dei Conciatori still bears the memory of those workshops where the skins discarded from meat processing were treated.

The designation of the entire Ostiense district as an industrial zone and strategic service area for the city was definitively sanctioned by the Nathan administration with the approval of a new Master Plan in 1909.  In the space of a few years, great works and imposing settlements were started and realised: the new gas production workshops of the Anglo-Roman Society (1910), the new river port (1912), the Magazzini Generali [General Warehouse] (1912), the Montemartini power station (1912), the Consorzio Agrario Cooperativo (1919), the Mercati Generali [General Markets] (1921), and the Rome-Ostia railway line (1924). 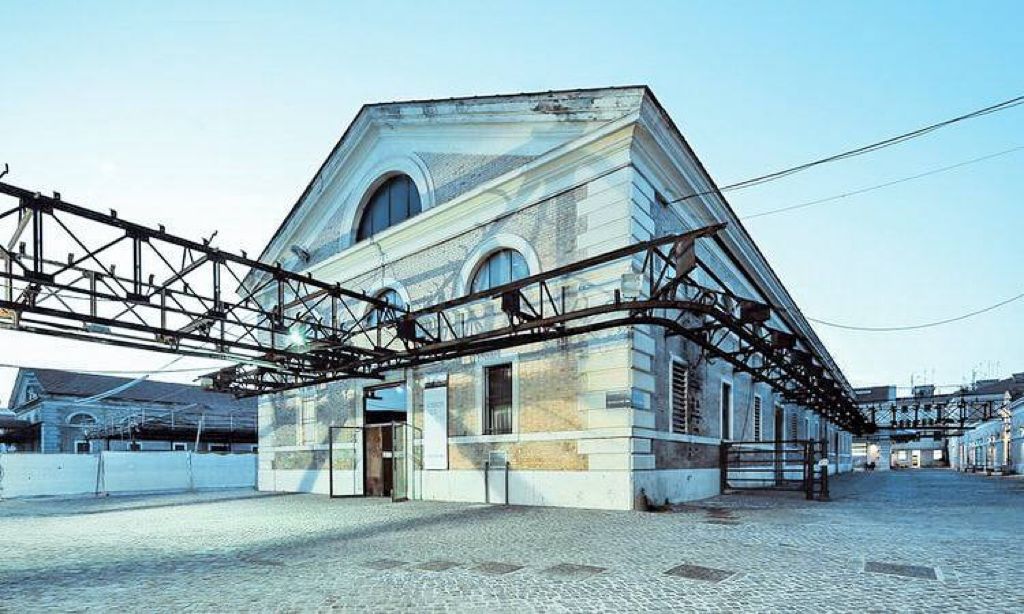 The development of Ostiense into an industrial centre is also supported and encouraged by the ” Pro Roma Marittima” Committee, which was set up with the aim of supporting the development of this specific area with investments and infrastructures, and connecting Rome to the sea for its economic and productive renaissance.

The Committee was founded at the beginning of the century by Paolo Orlando, an engineer of Genoese origin, a municipal councilor in Rome and councilor in charge of the Agro Romano from 1907 to 1920, and a senator of the Kingdom in 1934. A very interesting figure who played a fundamental role in the reclamation of the Roman countryside and the construction of Ostia.

Orlando believed that the new prospect for Rome’s development lay in the projection of the city towards the sea.

As early as 1896 he had drawn up a project for a landing port on the beach at Ostia and a navigation canal, parallel to the Tiber and 25 kilometers long, which would connect the port to the commercial docks to be built near the Basilica of San Paolo; the new commercial dock at Valco di San Paolo, also served by a railway yard, was to be 63 meters wide and 8.5 meters deep, sufficient for the draught and double-row passage of steamships.

Perhaps because of the huge cost of the work, 59 million lire at the time, neither the port nor the navigable canal were ever built. The Fascist regime dropped its priorities on the Ostiense, preferring to concentrate its efforts and design innovations on the E42 (now EUR) and identifying a new eastern route along the Via Tiburtina for Rome’s industrial development.

Despite this, on the tufa hill overlooking Via Ostiense and the adjacent river bend, the Garbatella garden township was built from 1920 onwards, one of the most successful examples of social housing in Rome: originally named Concordia, it was designed for the working class who would have to work in the new river port.

Paolo Orlando’s conviction was that Rome should not “remain an idle political capital, but become capable of (…) giving life to that industry and commerce which are necessary to form the economic basis of a large and populous city”.

As we know, and unlike other major European cities, Rome did not experience a lasting industrial season. In the clash between two different ways of conceiving the city’s development, those who saw Rome as a predominantly bureaucratic-administrative capital prevailed over those who wanted it to develop in a modern and therefore productive way.

And so many of the structures built at the beginning of the 20th century in the Ostiense area were abandoned and transformed into elements of industrial archaeology. 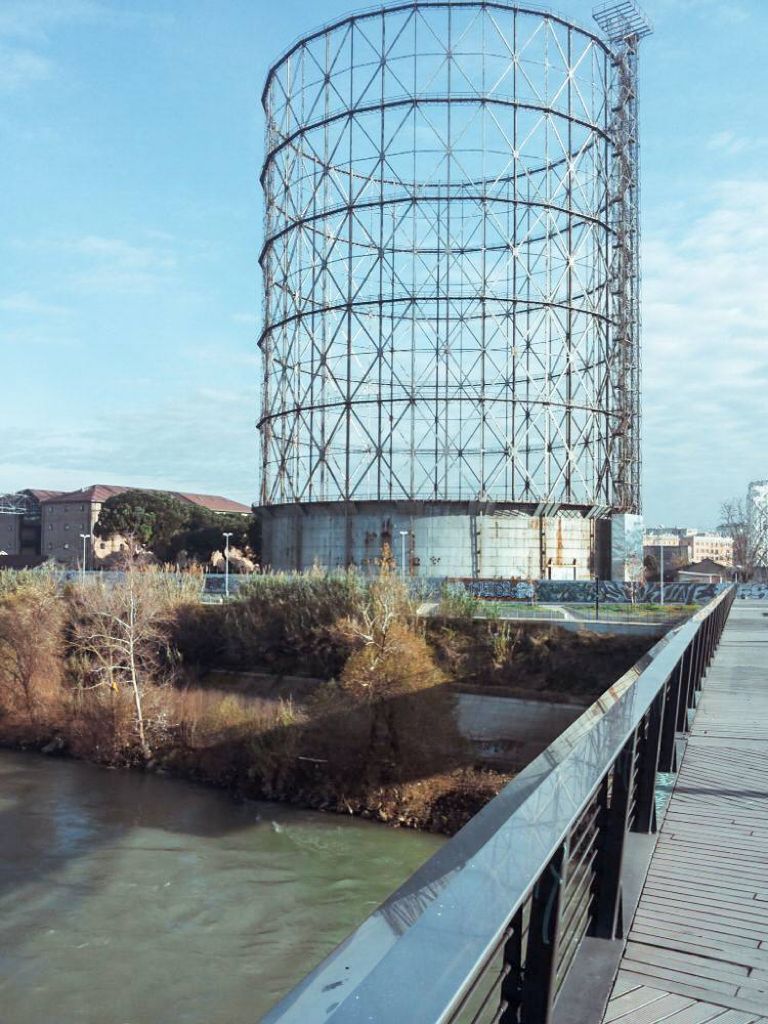 The iron scaffolding of the Gazometer – erected in the 1930s by the Ansaldo company of Genoa and the German company Klonne Dortmund, for a long time the largest in Europe with a height of 89.10 metres and a diameter of 63 metres – has now become the landmark of the district.

The Centrale Montemartini, which turned on the first electric lights of public illumination of the streets of Rome, after a complete renovation by Acea, has been transformed into an exhibition space and since 1997 has housed a selection of sculptures and archaeological finds from the Musei Capitolini. 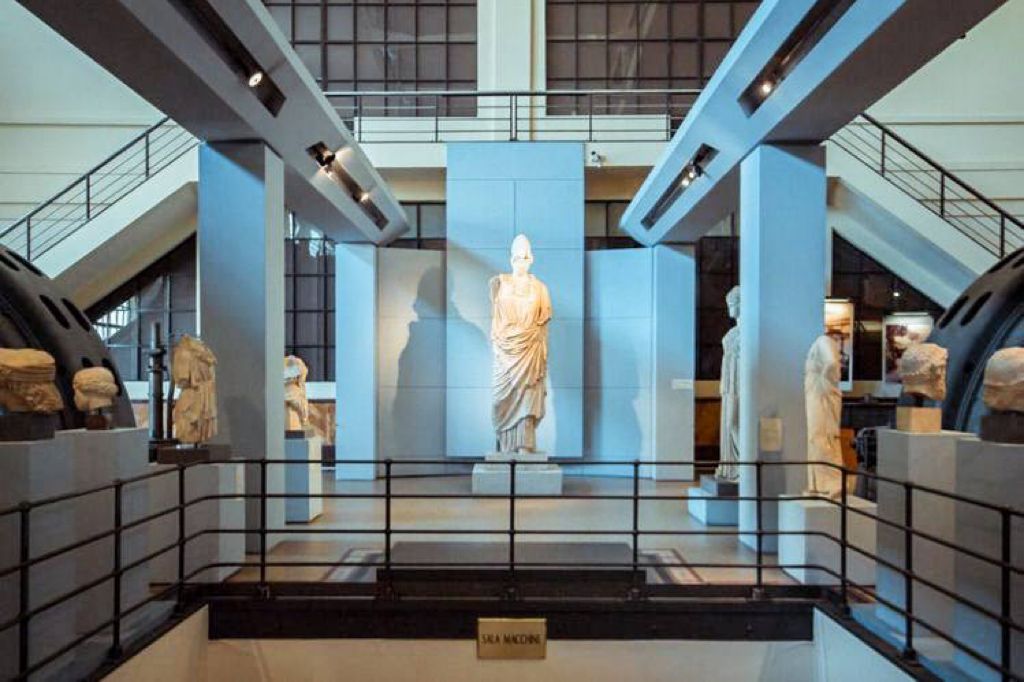 The buildings of the Magazzini Generali del Porto Fluviale complex, restored in the 1990s by the National Fire Brigade with a restoration project considered exemplary, are now home to the Istituto Superiore Antincendi and are used for teaching, training and information on safety and prevention sciences.

Many other areas and structures have yet to be recovered in this sector of the city, which Carlo Travaglini has described as “an extraordinary laboratory of urban transformation, a strategic area for the development and modernisation of Rome in the 21st century and also a particularly challenging area for cultural and design reflection.”

The hope is that it will happen soon.

For info and booking: https://thekeytorome.it/contacts/