A flower of the periphery. Church of the Millennium: God the Merciful Father at Tor Tre Teste

A flower of the periphery.

In anticipation of the Jubilee of the Year 2000, the Municipality of Rome and the Vicariate drew up the plan ’50 churches for Rome 2000′ with the intention of promoting the construction of new churches in the city’s peripheral areas, which had often grown haphazardly and were all in need of identity and community centres. Thus, in 1995, the international invitation-only competition for the parish centre in Tor Tre Teste, on the eastern outskirts of Rome, was launched. Six “archistars” were invited to produce projects: Santiago Calatrava, Peter Eisenman, Tadao Ando, Gunter Behnisch, Frank Gehry and Richard Maier.

After careful selection, the project was awarded to Maier, as it best responded to the symbolic/functional characteristics required, and in 2003 the work was inaugurated, which, according to the initial idea, was to “rest” on the free land around it, offering horizontal visual “permeability”, which was then somewhat lost with the construction of the protective fence…, almost like a white spaceship that had landed there.

The architect’s fame may well have played a role, but above all the extraordinary nature of the project, which is almost unique in Rome and rare in Italy, has meant that the place, once considered ‘remote’ and lacking in any kind of interest, is beginning to attract visits, almost pilgrimages, first from architects and architecture lovers, then from curious people of all kinds, to the point of giving the residents a palpable sense of pride in a place they were certainly not used to. The project area is adjacent to a large green area which closes off to the west with another urban suburb, as anonymous and chaotic as many others.

With the contribution and cooperation of the municipality, the district and local associations, this green area has been respected, enhanced with usable, clean and well-equipped paths and inserted as a qualified and pleasant setting for health trails. In the area there are the ruins of a section of the imperial aqueduct which is now another characteristic feature of this new park where, among other things, a small pond has been created as a water memory.

This is an intelligent, far-sighted example of how good architecture can serve first and foremost the quality of the services it is called upon to provide, but above all, the miracle of giving character and dignity to an entire surrounding area, transforming it into a ‘city’, a place of life that is pleasant to the eye, to ‘stay’ in and exchange for those who live there and those who come to it, is not far removed from the idea of urban beauty that is part of this country’s historical tradition, indeed it is its essence.

When you arrive in the neighbourhood, which is, moreover, a recent and planned development and certainly not a ‘spontaneous’ suburb like many in Rome, the first impression is one of surprise. A strange ‘white flower’ of concrete and glass appears at the top of the hill, where walls with orthogonal lines contrast with three fragments of curvilinear ‘shells’ connected by transparent windows. The immediate association is that of a ship with unfurled sails, and this is precisely the project’s first ideal ‘cipher’: the ship, as a metaphor for the Church, is it not the ship in the procession depicted in Giotto‘s mosaic in St Peter’s Basilica?

But the surprise continues, becoming the curiosity to enter between those straight and curved white walls, to see what is happening inside: this is the reason for the stained-glass windows that let themselves be crossed by the gaze that even passes from the opposite side, movement in the vision and dynamic dialogue of the structures. You have to go in, you can’t stay out. But then, once inside, the feeling changes, the space is rational, controlled in its proportions and regular shapes. The effect this time is one of welcome, not movement; you have to stay, see the space all around you and enjoy it in its essential, beautiful and reassuring linearity.

On the left, the curved walls, the shells, swell to leave you a safe space and welcome and protect other space between one curve and another, but they do not let the sun in directly from the south, the light enters through the windows and bounces off the surfaces of the straight and curved walls, spreading evenly, you are inside the light, wrapped up, immersed. The travertine used on the floor and for the furnishings is like an anchor to the earth, to the concrete, while the light takes you to a different dimension, forcing you to reflect on the sense of everything and of yourself in there, and, of course, first and foremost, on that of the loneliest and most obvious sign: the crucifix fixed on a shelf in the middle and placed as if suspended in front of a sort of tunnel of light shadow leading to the most powerful point of light, the small rectangular window at the end, just above, on the right. Everything is precise, well designed and realised, and everything and everything is significant, in short an aesthetic, spiritual experience of pure sober beauty. 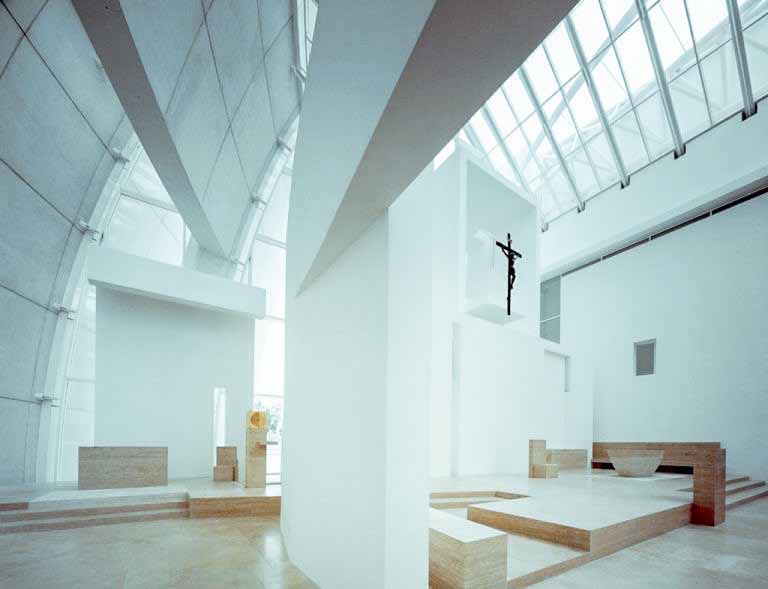 On the right, however, the space closes with a vertical wall, partly white and partly made up of a diaphragm of vertical wooden slats. This wall closes the space dedicated to the religious functions of the community and begins the area of the parish offices, a section characterised on the façade by the deep sign of the pseudo bell tower with its five visible bells.

Returning to the square, the visitor becomes more aware of the “slats” of the surrounding buildings, which seem to be folded like wings to make room for the central architectural event, which, although smaller in size, attracts all the attention.

“The new building had to represent a precise architectural sign, it had to be easily identifiable, and capable of reorganising and giving shape to this neighbourhood, which is somewhat anonymous but also so densely populated… We thought about the nature of the space and its appearance during the day, even though the church is used by the community in the evenings and at night.

Moreover, being located in a residential neighbourhood, the church will be seen by those who enter it, but also by hundreds of families who will see it from above, who will live around it: I wanted the life and light of the sacred building to enter into the life of the neighbourhood… I hope, however, to have given these spaces a luminosity that is consistent with the openness to others that characterises religious feeling.” – Richard Maier.

Your ‘ship’ welcomes, your ship arrives and departs but always carries and transports, illuminates and enriches.

Metaphorically speaking, this richness should always be the hallmark of good architecture, which as such lasts over time, regardless of the occasion on which it is produced.

The church is open during the following hours:

A flower of the periphery.