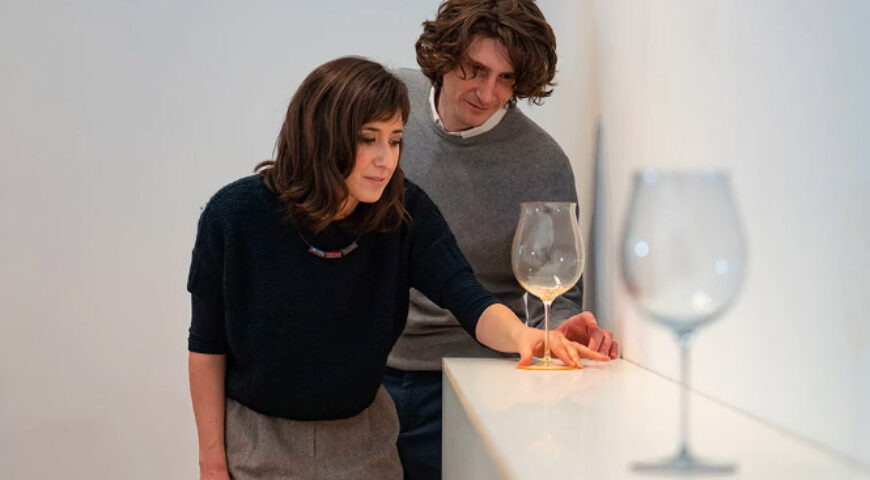 In Rome, art awaits tourists not only in the endless squares and alleyways of the Eternal City, but also in the hotel where they stay. One of Rome’s most famous hotels, the St. Regis, a stone’s throw from Via Veneto, has been home to the Galleria Continua, founded by Mario Cristiani, Lorenzo Fiaschi and Maurizio Rigillo, since 2020.

A few days ago I had the opportunity to meet the two young managers of Galleria Continua, Cecilia Pecorelli and Veronica Siciliani Fendi, whom I would like to thank for guiding me through the gallery’s exhibition spaces. Cecilia told me how the idea of creating an office in Rome came about, the projects carried out in collaboration with the historic hotel and the participation of the artists invited by the gallery in the Back to Nature 2021 exhibition currently taking place in the Villa Borghese park.

The three Tuscan guys who founded the gallery have known each other since they were teenagers. The idea of creating a network of contemporary art galleries around the world came from a small space measuring 6 metres by 5 metres in their home town of San Gimignano.

The first Galleria Continua was opened in a former cinema in the same Tuscan town in 1990. The main aim of the art space was to build a dialogue between contemporary art and the rich history of the town and its surroundings, as well as the interaction of young artists with renowned masters.

Already in 2005, they opened a second gallery in Beijing to introduce Western artists to the locals. This gallery hosted exhibitions by Chen Zhen, Anish Kapoor, Antony Gormley, Ai Weiwei, Michelangelo Pistoletto and many others. Two years later they opened a new gallery in the suburbs of Paris, Les Moulins, then in Cuba and finally in Rome.

Today the project has seven galleries worldwide. The founders always pay great attention to the choice of location, giving contemporary art the opportunity to enter into dialogue with the place and bring it and make it known where it was not there before. 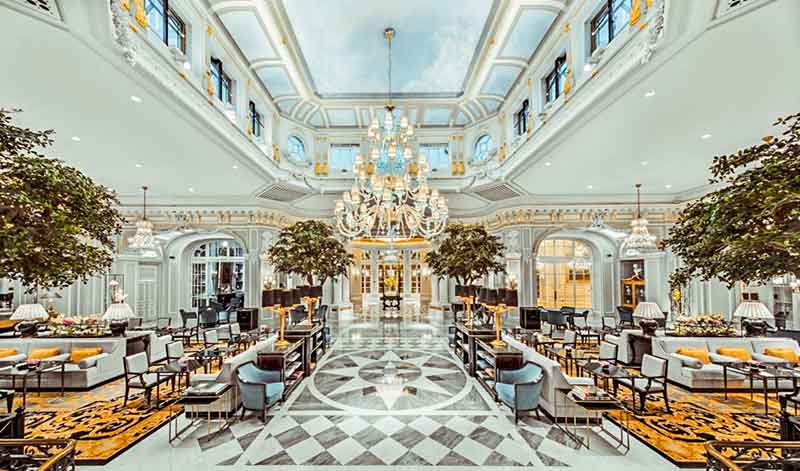 In 2020, the opening of the Galleria Continua at the St. Regis also marked the 30th anniversary of the founders’ exhibition activity. The choice of a luxury hotel as the location for the new gallery is not accidental.

Mario Cristiani said in an interview that “the projects happened where we find someone who thinks like us, where there is a world we can explore”. The man who helped bring the Galleria Continua project in Rome to life was the general manager of the St. Regis, Giuseppe De Martino.

After a long restoration, the historic hotel in Rome reopened its doors to guests in the capital in 2018. The great art lover Giuseppe De Martino immediately understood the importance and necessity of the collaboration with Galleria Continua. Their first project was, in 2018, the exhibition of the Milanese artist Loris Cecchini during which the hotel hosted the works of the series Blaublobbing, Cloudless, Waterbones и Wallwave vibrations.

In 2020, Galleria Continua accepted the hotel’s proposal to occupy a couple of rooms on the ground floor overlooking Piazza della Repubblica. Very significant was the first exhibition in which Cuban artist Josè Yaque presented his works, linking the new exhibition space with Galleria Continua in Havana, which opened in 2015.

Until next 11 June, Galleria Continua is hosting “Toccante”, a solo exhibition by Valentina Ornaghi and Claudio Prestinari, an exhibition project created during the second lockdown.

Gallery manager Cecilia Pecorelli explains that “the idea of the artists in the exhibition is to represent the future in their works. And this is what Galleria Continua often does, to see what will happen next. It was with this idea in mind that the exhibition ‘Toccante’ was set up to express the concept of a will to come together, to meet again and reunite”.

“The works on show were created in December when it was still thought that we could return to normal in February. The artists, who specialize in ceramic works, worked together in a pottery workshop in Faenza: from this collaboration, the vases, one of their main works, were born. For the exhibition space at the St. Regis, Valentina and Claudio have created the large glazed ceramic plates, which recall the convivial desire to meet in front of a table, to eat and be together. The plates created are individual pieces, each one different from the next. They are created from the fragments of a broken plate, then put back together with an enamelling operation, underlining their desire to rediscover a design already inherent in the plate, since the initial unity is not the end but the beginning of a journey”.

Broken plate put back together with care, glasses that with the help of a magnet come closer to each other and, at the “touch” of crystal, are dispersed at different ends of the table, two linen canvases that complement each other: this is Ornaghi & Prestinari’s idea of the encounter and relationship with the other.

The title of the exhibition, ” Toccante” (Touching), was inspired by a reflection by Jean-Luc Nancy – “a petal of a flower on my hand weighs almost nothing, but I feel this almost nothing.” 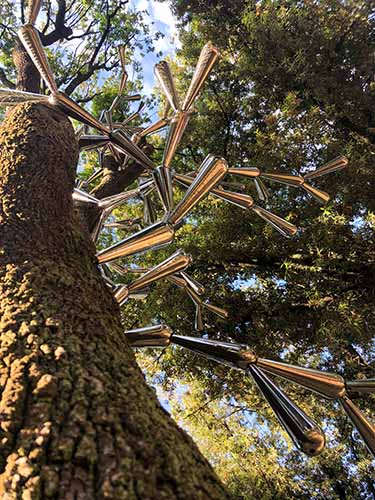 Galleria Continua contributed to the second edition of the Back to Nature exhibition at Villa Borghese, curated by art historian Costantino D’Orazio.

The gallery invited the artist Loris Cecchini, who created for the exhibition the steel structures attached to a tree (Arborexence, 2021), and the Argentinean artist Leandro Erlich, who created a spectacular staircase and window leading to the sky. (Window & Staircase – Eternal City, 2021)

The gallery, with the help of a specialised company, helped Loris Cecchini in his search for the right tree to support the weight of the installation made of metal.