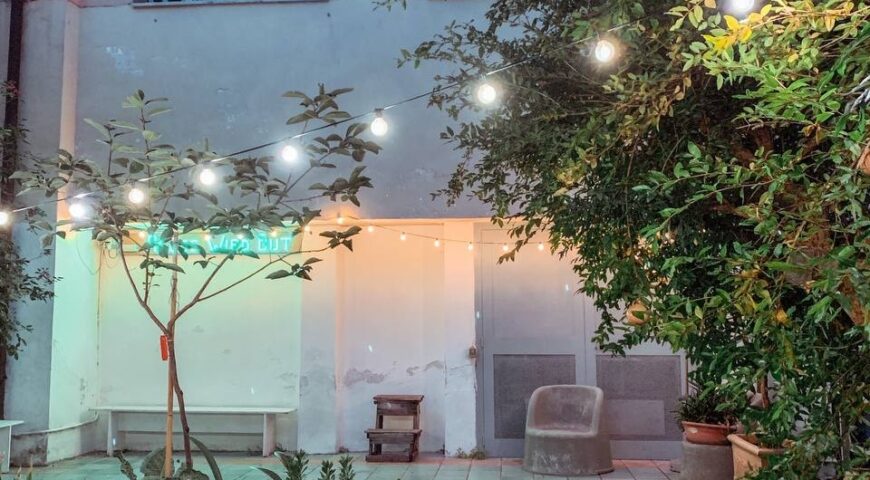 Our Openhouse, chronicle of a trip to the center of Rome

Our Openhouse, chronicle of a trip to the center of Rome

Our adventure began about a month ago.

“Isabella, do you know that Openhouse Rome is on 3rd and 4th October?”

“You see that finally… you have been waiting for two years for them to do it again! Since you were at that Jazz concert on the roofs of Trastevere … ”

Yes, actually that story of me sitting on the tiles with the glass in my hand and the sax playing among the guests and the sunset…I had not spared anyone. But it seems like a long time ago.

So I start like crazy to browse the list of available locations and compose an ideal map of me and Isabella unleashed for Rome:

“You take the historic center, I Monti and Trastevere …” I was inexplicably happy.

A bit because it seems to be doing many things for the first time lately, to relive a new life. A bit because this is what I think about Openhouse:

I like to see the idea of ​​an architect and an owner at the service of needs and beauty.

I like walking around with the OHR map as a tourist in Rome.

I like to take ideas for new experiences to share with our guests and generate in them an inexplicable happiness.

I like to enter the Openhouse locations and meet people, admire intuition and taste, chat and exchange numbers. I also often end up having an aperitif and telling about TKTR and hearing stories from others, following us on social networks and exchanging links about a bit of everything.

And walking along the paths of the wanderlust we finally arrive at Day 1.

I would not like it to appear that we have a particular flair for reservations, some places we actually wanted to visit were already “fully booked” and others we did not know them and simply intrigued us, however each experience proved to be absolutely up to expectations.

Isabella between art and design

The first place visited by Isabella is the ISIA ROMA DESIGN. The Higher Institute for Art Industries (abbreviated with the acronym ISIA) is an institution of high public culture dedicated to industrial design. Founded in 1962 by Giulio Carlo Argan, the ISIA in Rome is the oldest institution in Italy for training in the field of industrial design.

The headquarters of the Institute is housed in the former convent of the Ministers of the Sick rebuilt starting in 1659 on the pre-existing hospital of the Confraternity of the Disciplined or Battuti.

The late Baroque architectural complex adjacent to the Church of Santa Maria Maddalena, overlooks the square of the same name, a few steps from the Pantheon. The building is spread over several levels, with a total area of ​​2000 square meters, which house the teaching rooms, the research laboratories, the aula magna (the former convent chapel), the teaching and administrative offices, an internal courtyard; and a precious specialized library, containing some of the most important collections on design.

A rigorous, clean, efficient environment that smells of school and “less is more” … do not miss the next visit also because the building that houses the institute is “worth the trip“.

As an appetizer, do not order anything other than the adjacent Church of Santa Maria Maddalena.

Isabella runs to her next visit to the “28 PIAZZA DI PIETRA – FINE ART GALLERY”.

The space is part of Palazzo Ferrini-Cini. First used as an artisan shop and then as a warehouse, it was completely renovated in 2012 to become a contemporary art gallery. Among other things, the restructuring has brought some Roman remains of the II century to a new beauty. A.D. present in the structure: these are the foundations of the portico of the Temple of Hadrian (145 AD) expertly restored with the help of the Superintendence of Architectural and Archaeological Heritage.

In addition to offering some interesting ideas of contemporary art, the gallery is itself a work of art. Well spotted.

Tips for not going home to eat

The Suburra was the first suburban village of the primitive city, located on the Palatine Hill. This district, today corresponding to the area of ​​the Monti district, a stone’s throw from the Forums, was the most popular part of ancient Rome: a maze of alleys, shops and insulae, inhabited by gladiators, artisans, prostitutes and plebeian families.

I still see that authentic and popular soul beneath the surface of sophisticated shop windows and well-kept restaurants and … I can’t explain it.

I walk halfway through Rome and arrive at via Urbana 152 where the luxury residential building known as STAMPERIE 152 – LUXURY APARTMENTS is located.

The project, curated by Studio 3C + t Capolei Cavalli associated architects and whose construction ends in 2014, has respectfully renovated the previous “Il Messaggero” Printing Works that stood there since the 1970s.

Here the internal volume of the Stamperie has been transformed into prestigious real estate units, while the external elevations, on via Urbana and Via della Caprareccia, have been completely recovered and left unchanged in their original configuration. The fulcrum of the entire complex is represented by an internal courtyard with trees, shrubs, water and green walls, made with traditional stone and iron materials, while water flows on one wall that falls into a small cobbled pool; all materials declined according to a contemporary architectural language.

The courtyard project reworks the concept of the theatrical scene (the Stamperie have also been a theater in their articulated life!) And acts as a place of curiosity and entertainment, with stone flower boxes and benches also used to delimit the spaces pertaining to the real estate units ground floor.

Now that Openhouse closes its doors until next year, I suggest you reopen them early by asking the friendly caretaker for a favor. And yes, I would live there.

I don’t know what success the visit I will talk about now has had, because it is not among the usual suspects, but I spend my “coup de coeur” on it.

The nice niece of the owner, Antonella Argenti, welcomes us and we are in her workshop in via degli Zingari. The impact is magnificent, as if a veil had covered a work of art for centuries and then, suddenly, was removed.

The building where the laboratory is located housed an anonymous apartment characterized by the traditional sequence of served and servant spaces. In the restructuring, which later became restoration, the false ceilings and all the partitions were removed, the cladding that hid unexpected openings was eliminated, and the walls were removed; the wooden ceilings have been brought to light, the original internal connections have been rediscovered, and the ancient plasters have been restored. During the restoration of the walls, by carrying out the descialbo, some fragments of a bird decoration, frames and sub-windows in fake marble and a fragment of a lake landscape dated 1600 reappeared between old fabric and wallpaper samples from the historic LELLI store in Rome, located in Via Tiepolo, 6.

I have seen wallpapers of uncommon beauty and I will not fail to pay a visit to the shop in via Tiepolo to ask Ms. Argenti more questions.

And yes, I would live here too.

How not to end this ride in the popular heart of Rome with the melancholy Trastevere.

It doesn’t take much to get there by motorbike and there is a beautiful autumn light. It’s aperitif time.

And with an excellent glass of red the girls of the Esthia Laboratory Cultural Association welcome me.

We are near Via della Lungara.

The ESTHIA Laboratory, founded by Christina Heger. in 2007 it became a cultural association that supports and promotes the work of young artists in Rome and abroad.

The space hosting the ESTHIA initiatives maintains the structure of a laboratory that revives the ancient craft traditions of Trastevere. It is an exterior / interior open onto via San Francesco di Sales, which offers guest artists the opportunity to exhibit their work, creating an opportunity for encounters and the birth of new projects.

I have been chatting with Marta and Greta for about an hour.

Theirs is a story of a partnership with Christina made of respect and dedication.

They show us the small courtyard, with fruit trees and bohemian lights and it seems to me the most beautiful place there is because these girls tell me so much about their inner world, their unconventional choices and their art.

Greta is a photographer and she shows us some interesting works, exhibited on an ancient blacksmith’s table with great humility, they seemed to me to reveal a sensitive eye and a sincere taste.

Marta is a self-taught goldsmith who cuts gold out of simple and ancient lines, highlighting the stones that she wraps with her gold threads. Marta, I already know that I will be your client, do you know?

The third girl who works with them was not present, her name is Rossella, but I photographed one of her works inspired by Dante’s Paradise. I already know that you have had your satisfactions as an artist and that you will exhibit as the winner of a competition at a renowned gallery in via Margutta.

I was there in contemplation, among the pomegranate tree, the vases with spices, the Nokia nailed to the wall and I got lost in that atmosphere so lively and soothing at the same time.

Ready for the next vernissage, girls.

Ready for the next Openhouse.

Tips for not going home to eat 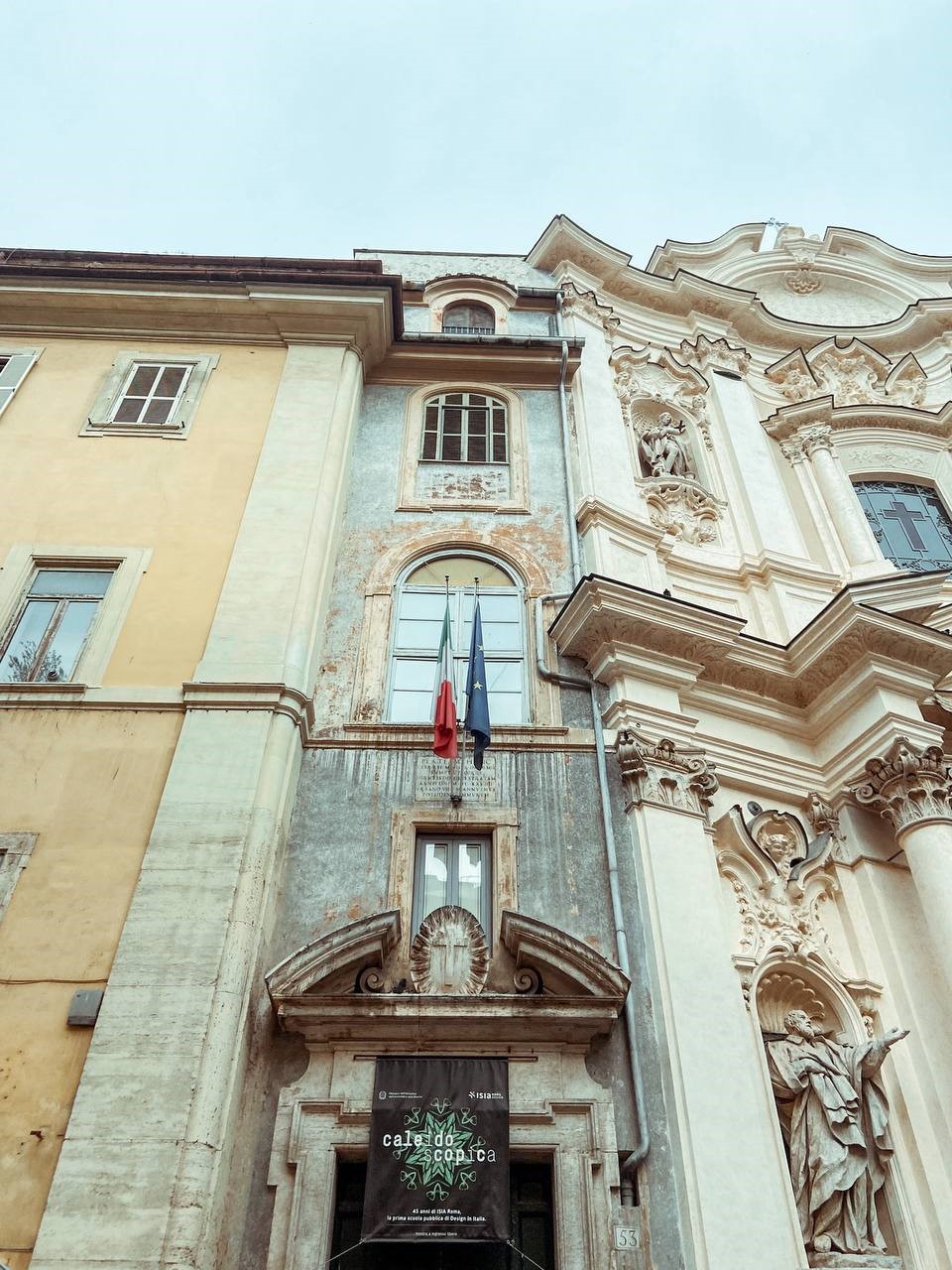 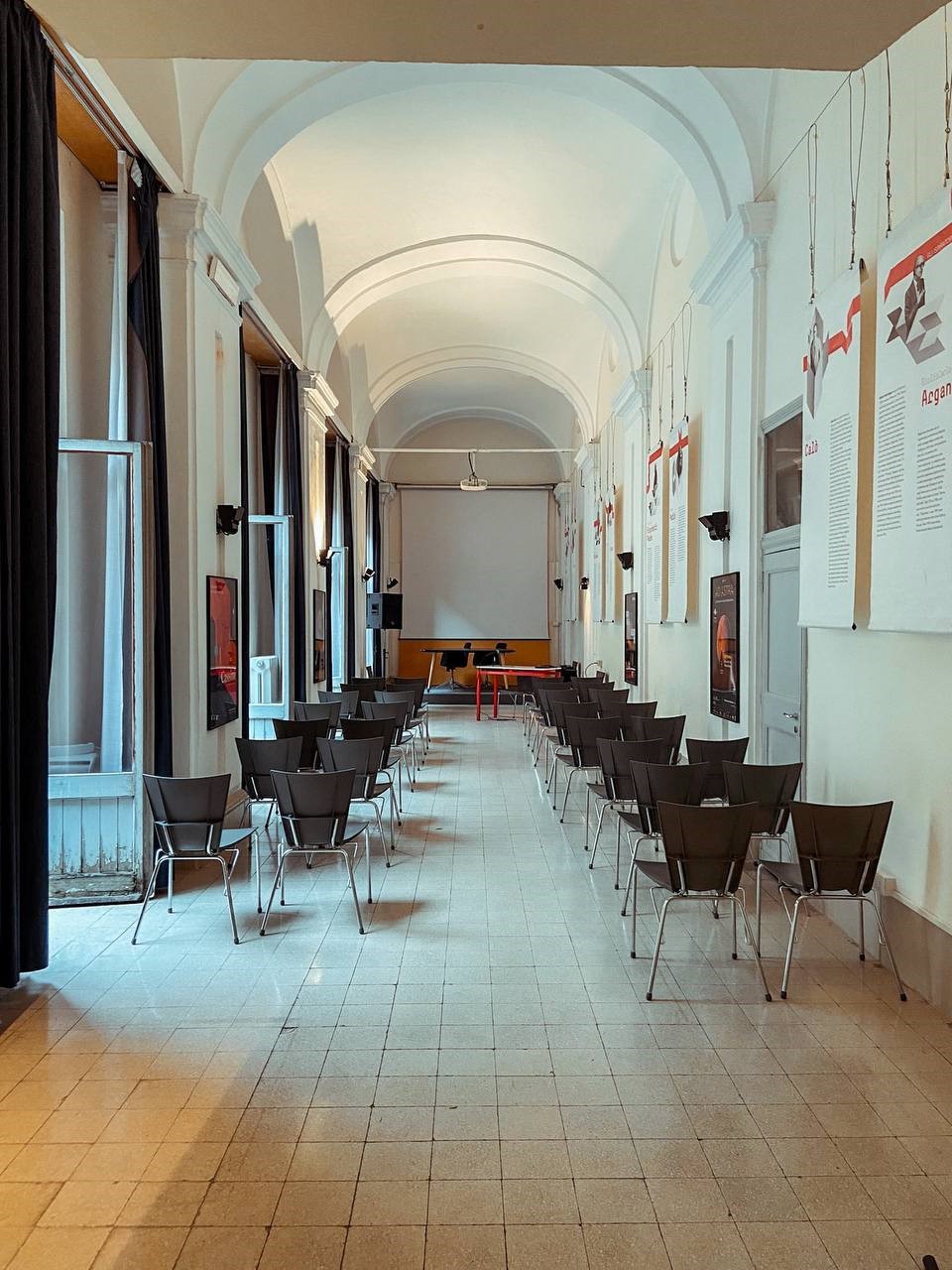 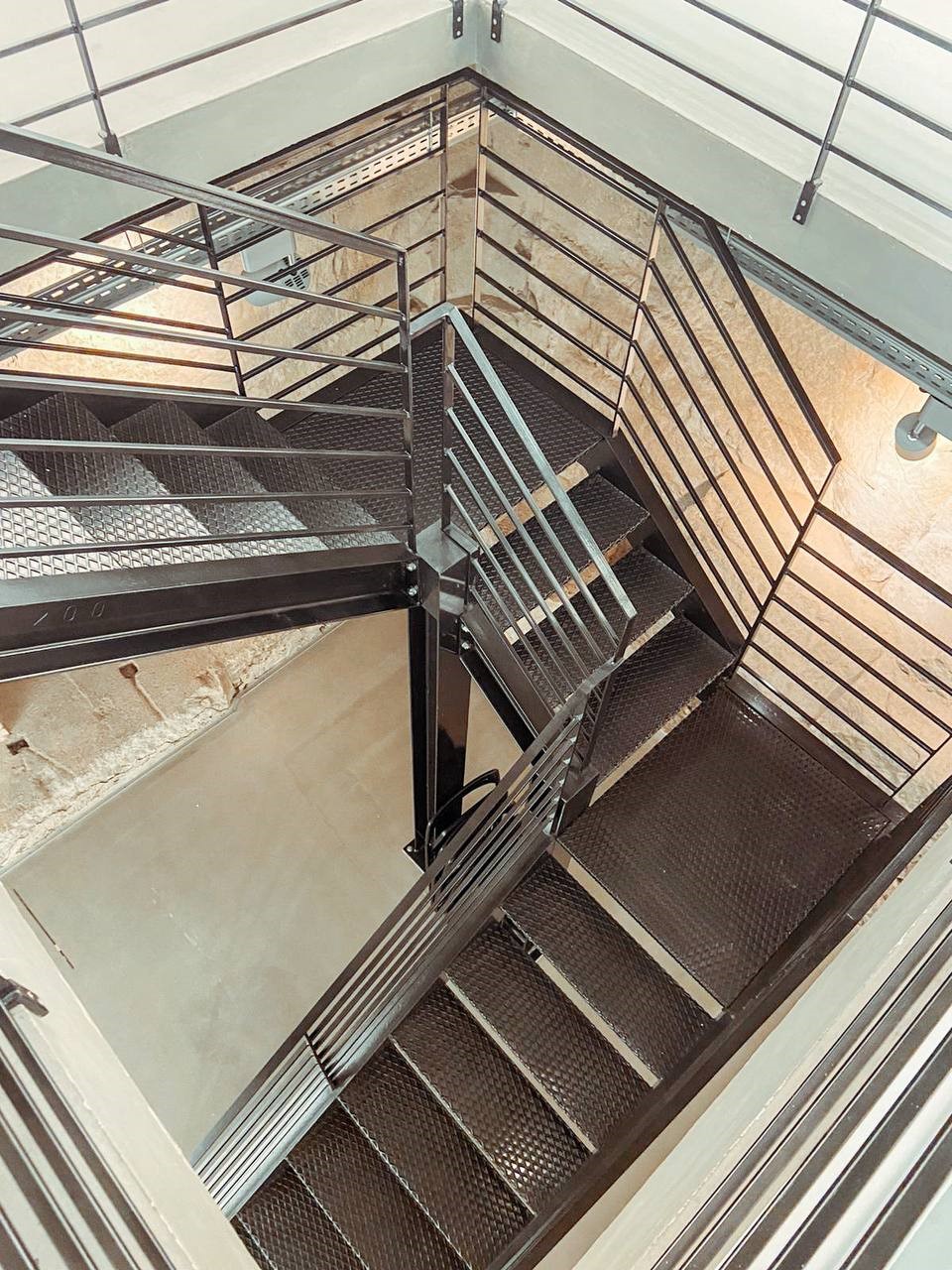 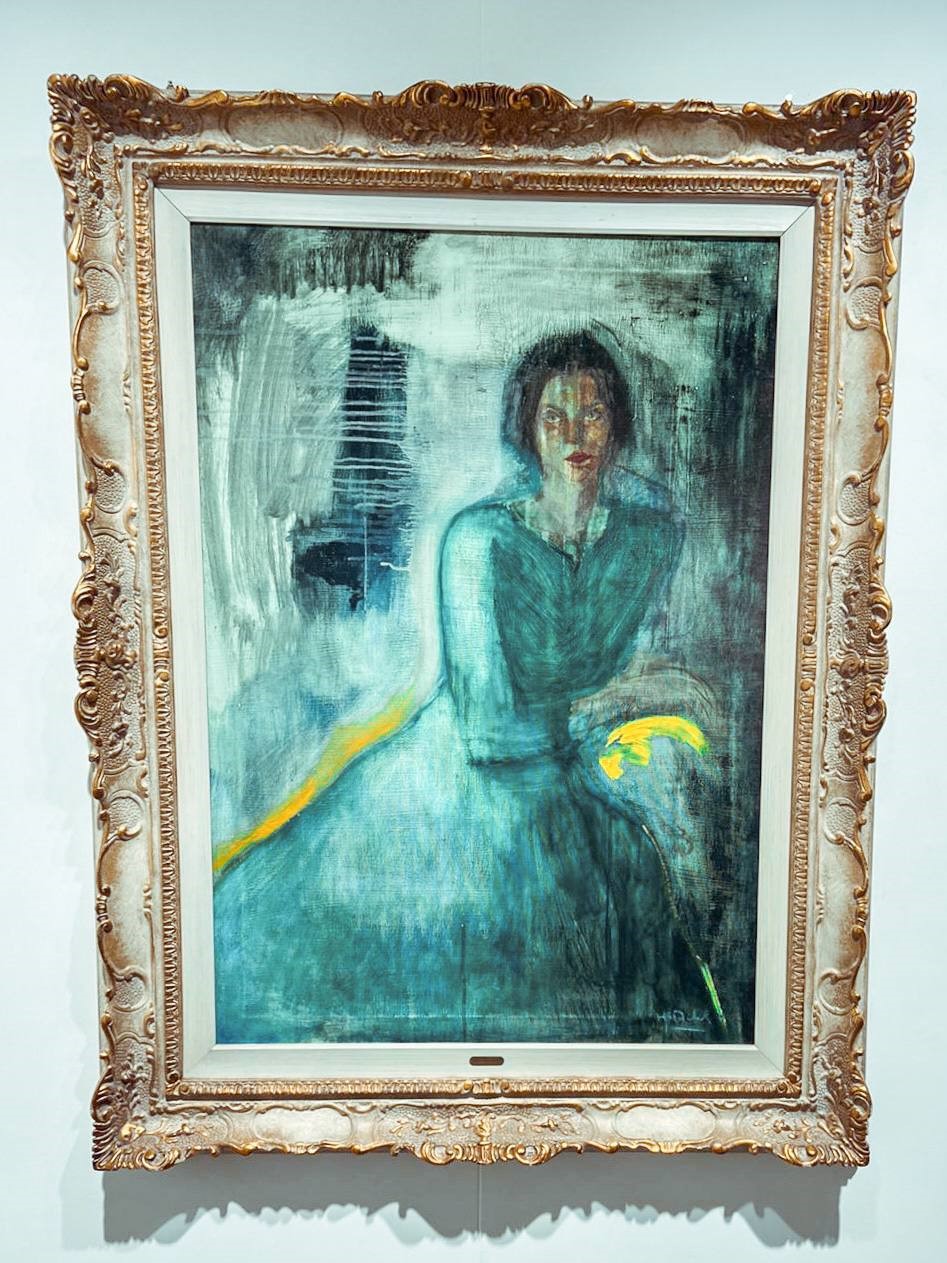 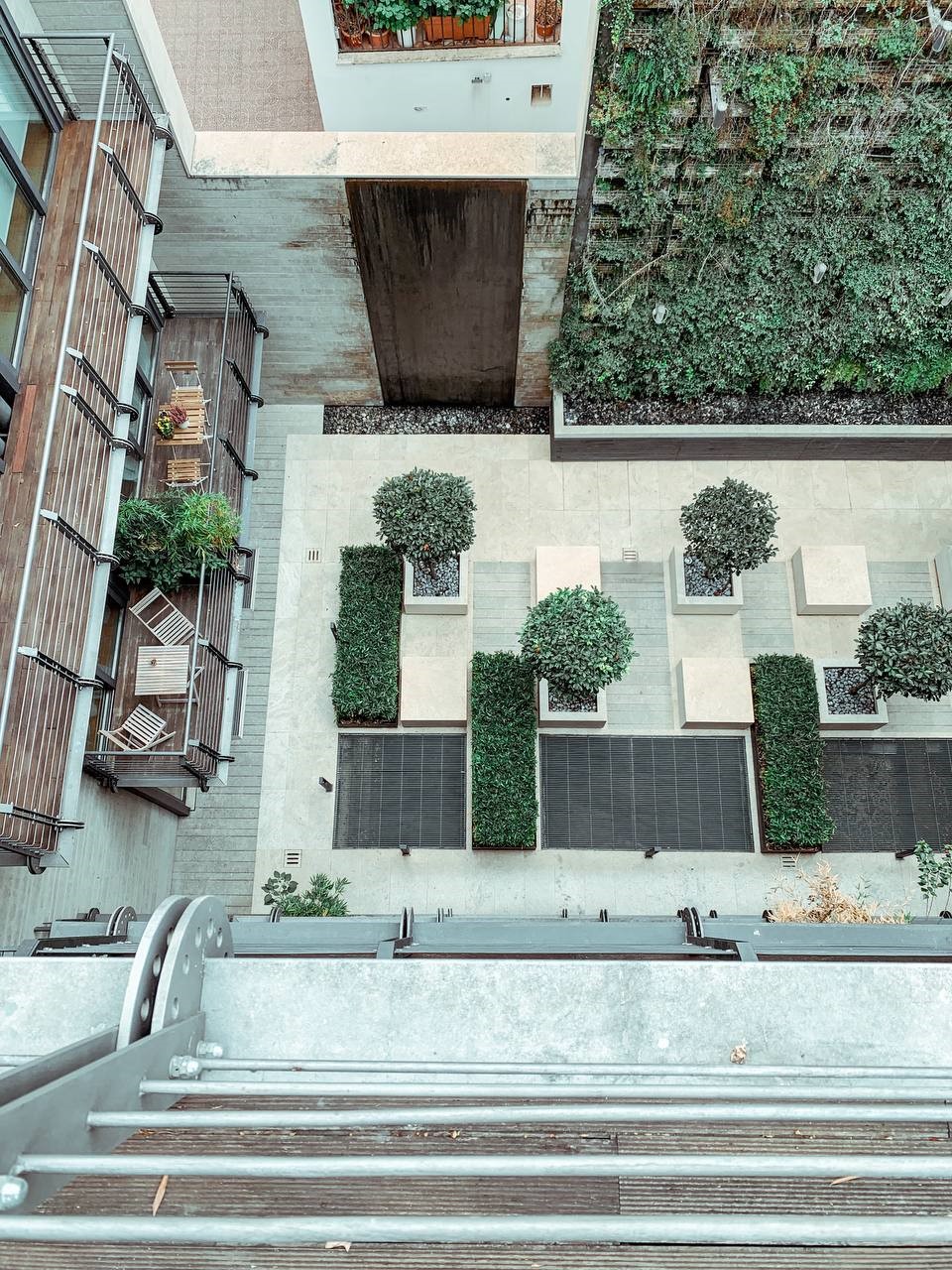 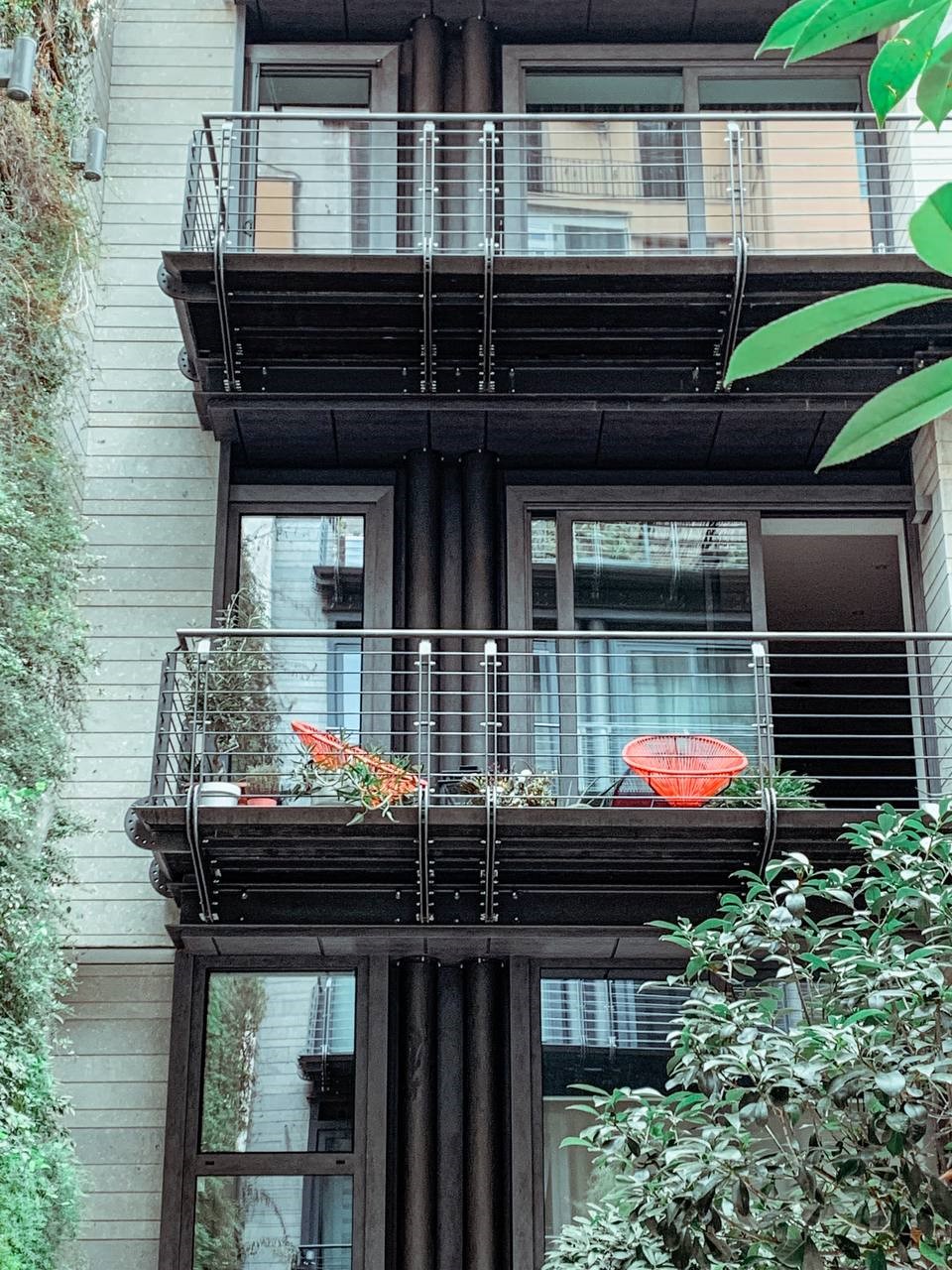 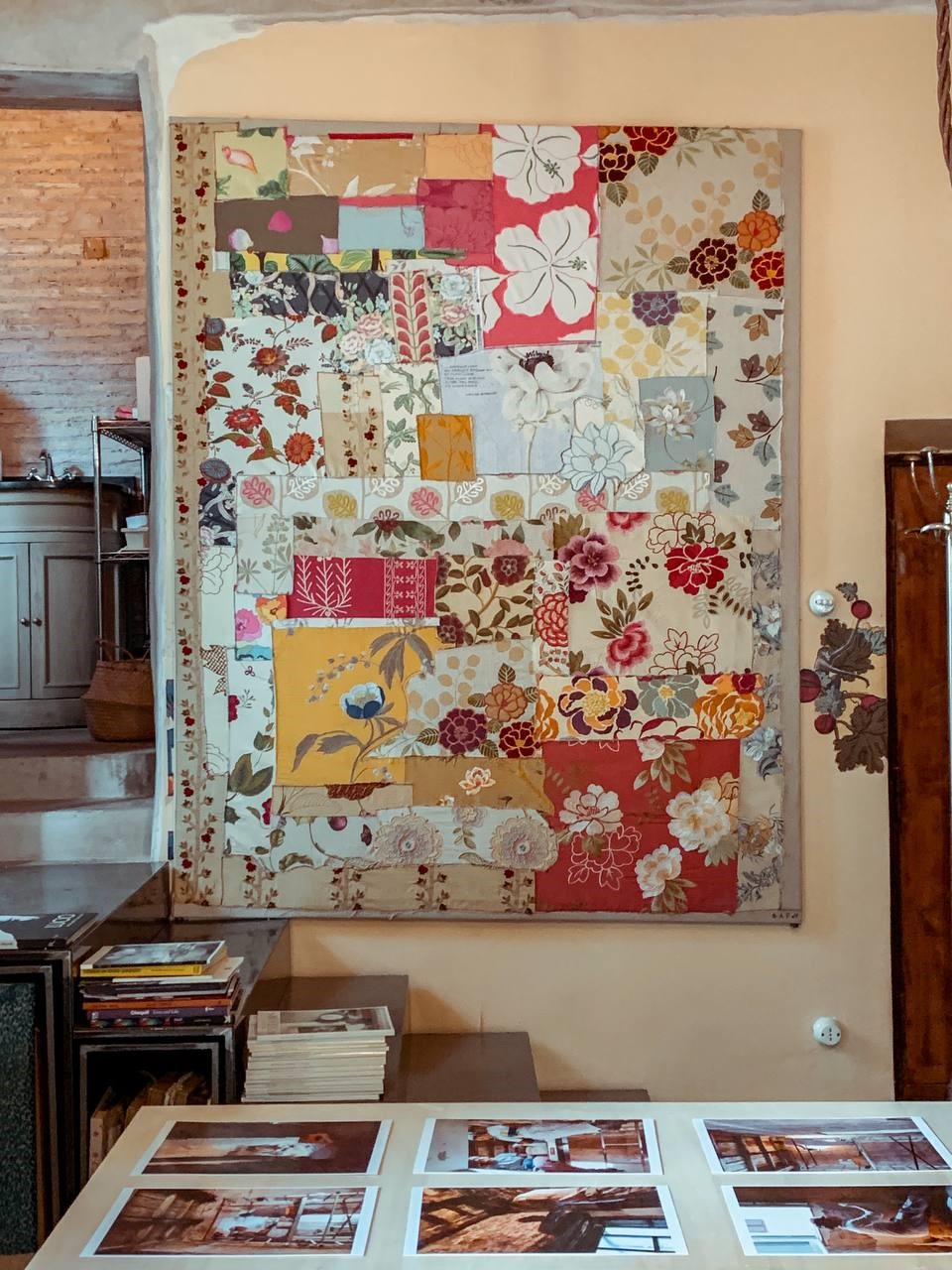 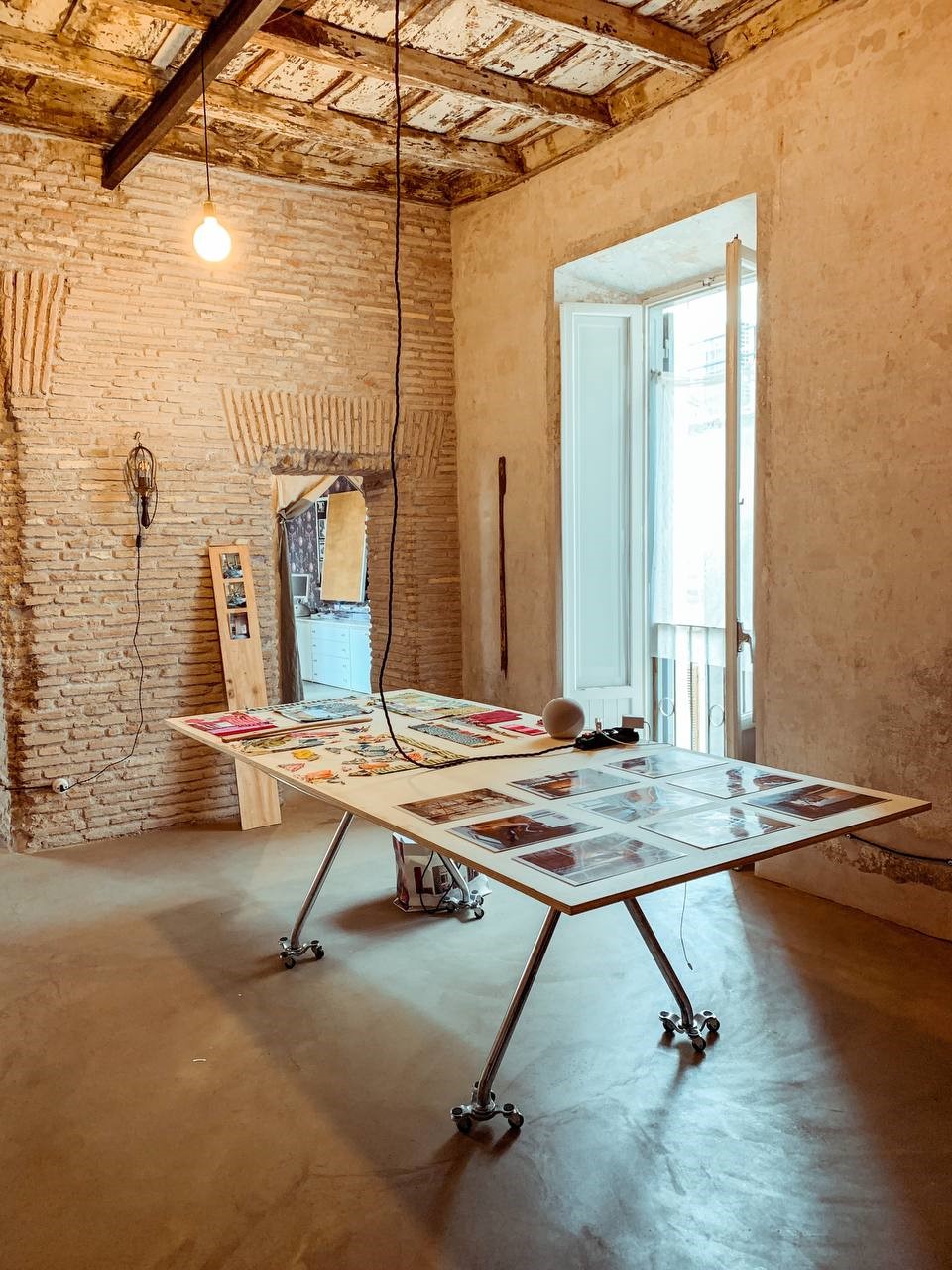 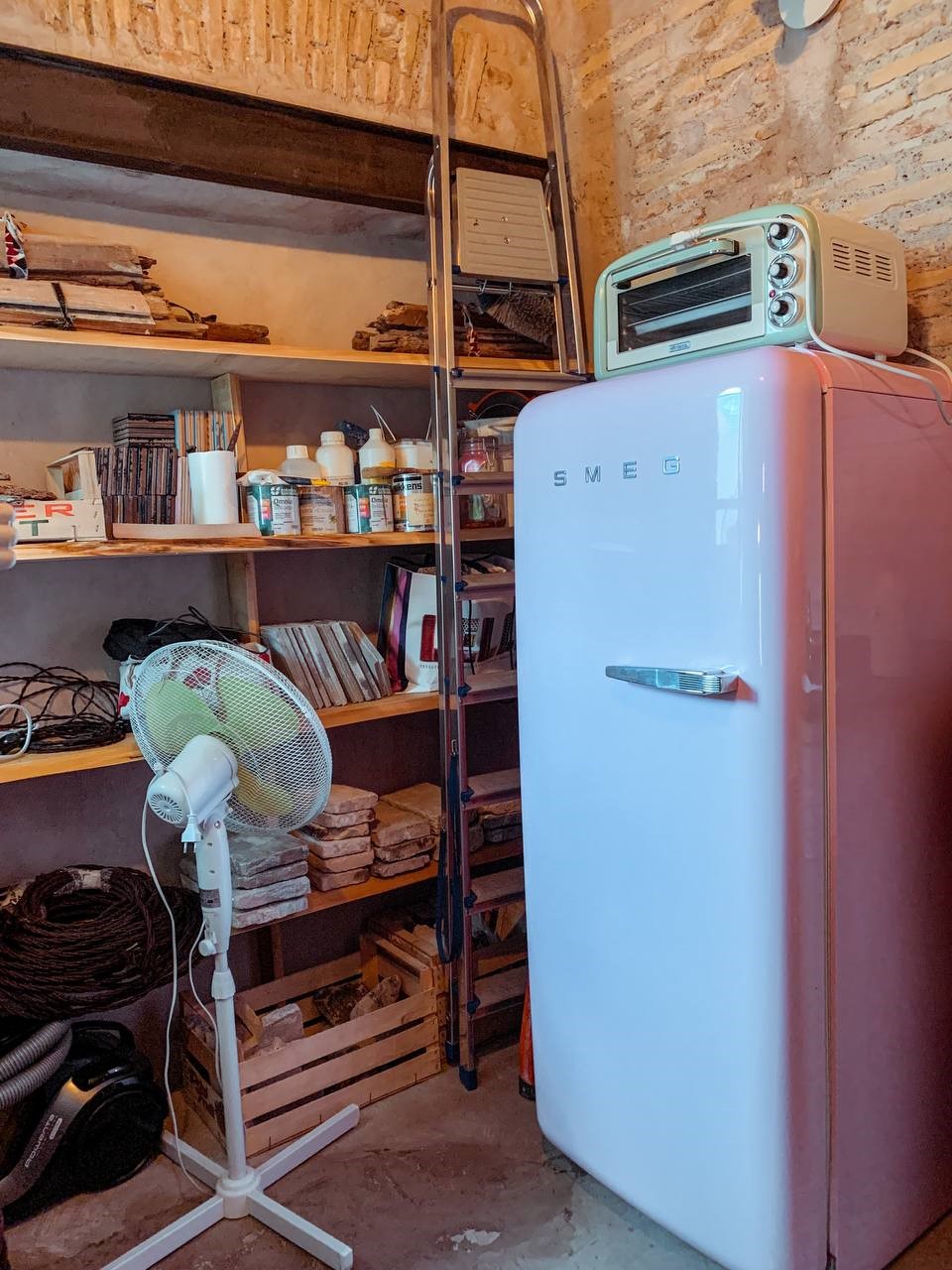 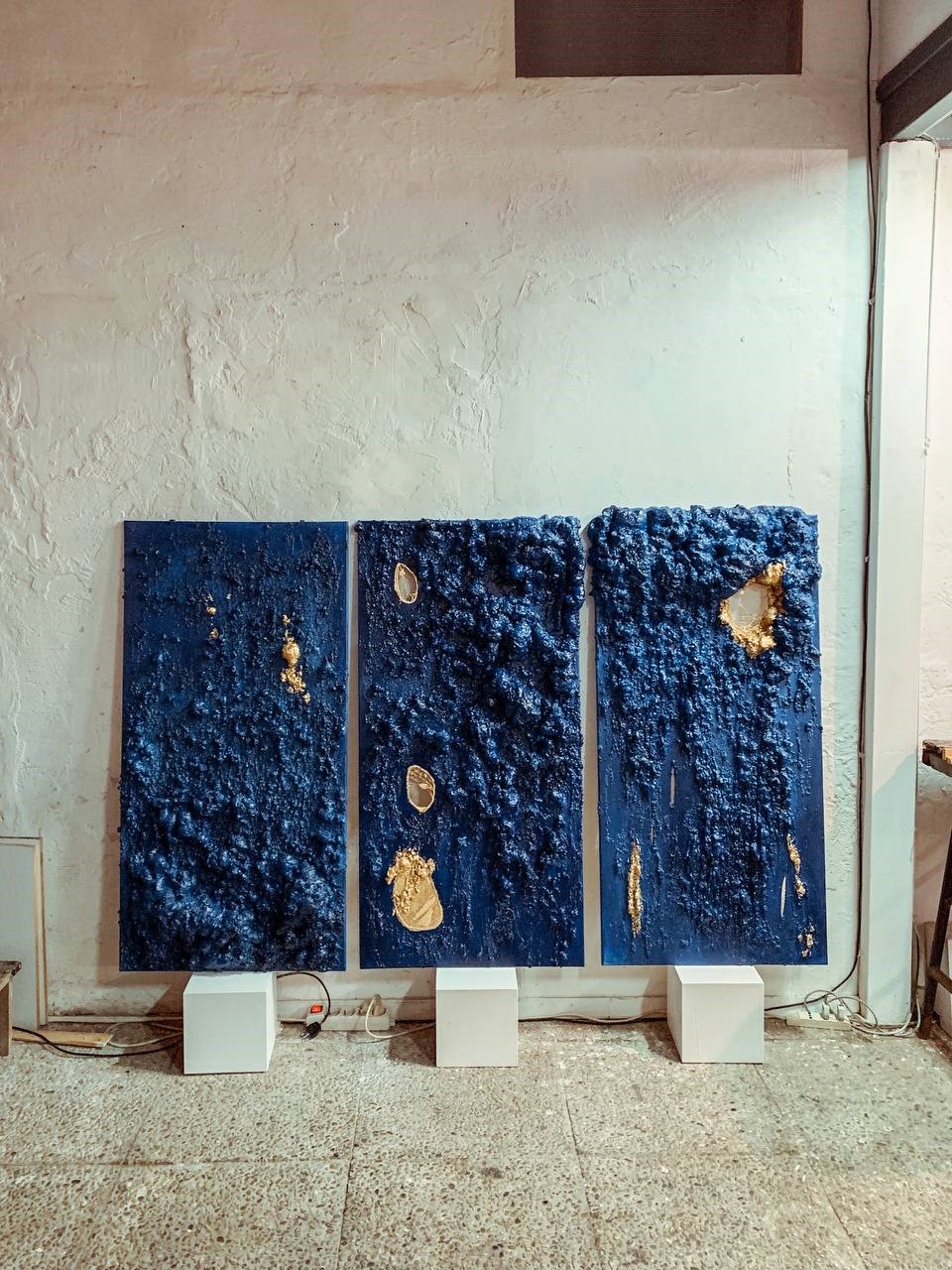 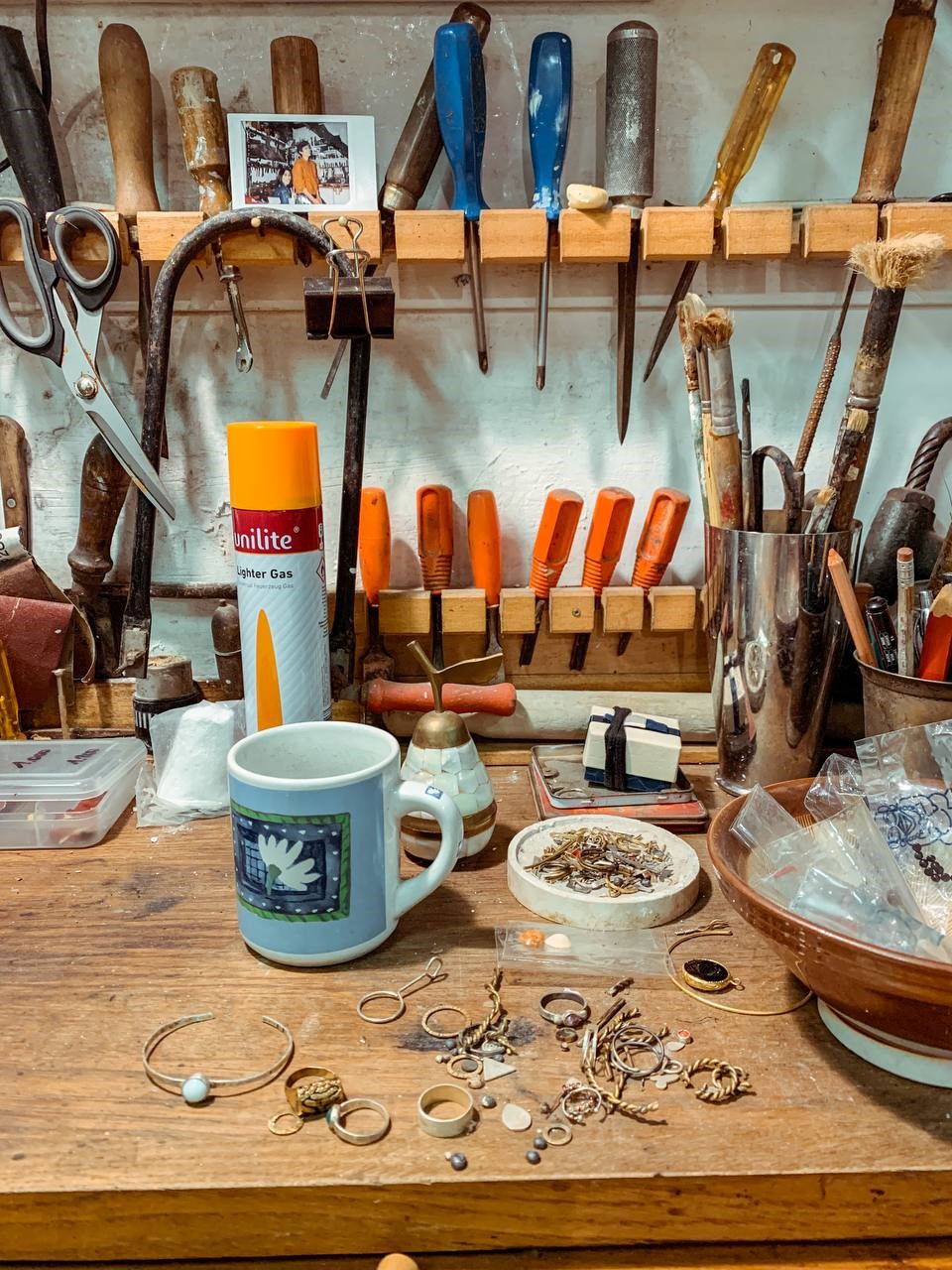 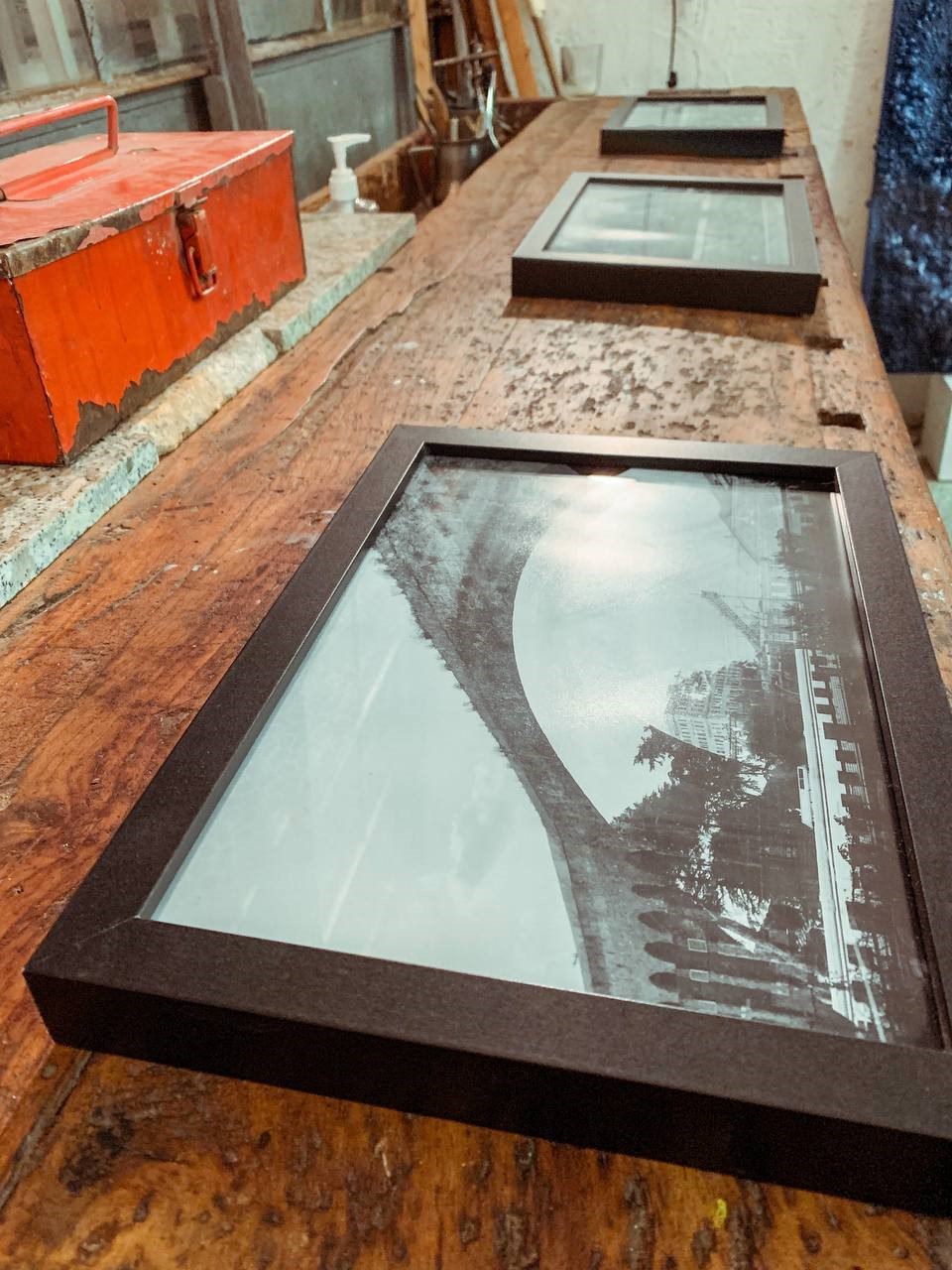 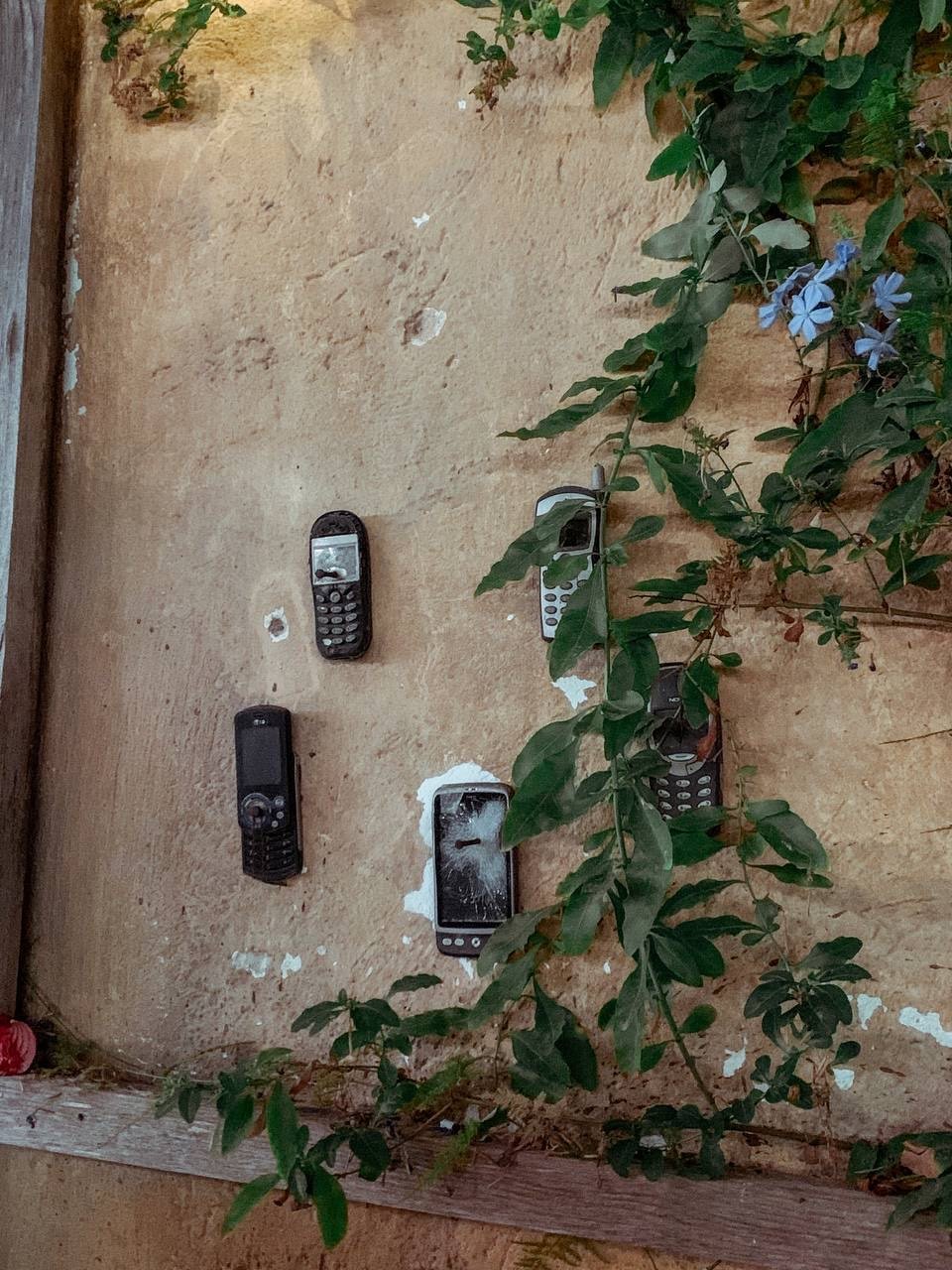